Good Thursday all , today is release day for Mike Evans and his second book in the Demons Beware series . DELIVER US FROM EVIL 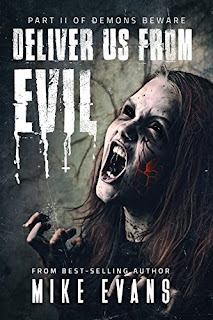 Deliver Us from Evil begins fifteen years from where book one ended. Billy and James no longer mere boys are now leading the fight against evil, one demon at a time, doing the work of God.

In Deliver Us From Evil, the demons are back and have spread beyond Chicago. They have increased their threat and now those that fight demons have become the hunted!

The Devil is recruiting for his play in the domination of Earth, and has sought out someone not possessed to do his bidding.

Can head exorcism priests Billy Parker and James Clapper keep evil at bay, or will the demons rule, causing hell to come to Earth?

MY REVIEW
Devil us from evil starts `15 yrs after the first attack . Billy and James are all grown up and have entered the priesthood . They are part of a special force through the church that deals with the fighting the demons .  Can they keep the devil from taking over the world or will they die trying
This is the second book in  the series and when I sat down to read it . I was wondering how Mike was going to scare us now and if he could scare me again . Well he did his job really well . I couldn't put the book down. I was turning pages well into the night . The uneasy feeling I got when I was reading is a good indication that Mr. Evans was on the right track .
The character are the same characters that were in book one . They are older and wiser and ready to wage the war on the devil . Billy and James are such strong characters more like brothers then good friends . They battle on the side of good and you cheer for them the whole way through. You will also shed a tear or two as you read and find out what happens to a few of the beloved characters .
This book will keep you on your toes as you read . It is fast paced and scary as all get go . You will be on the edge of your seat for most of the book . You will want to protect the main characters as they battle the demons . This isn't a book for the feint of heart . If you cant handle blood and the gore that comes along with fighting said demons . You will question the bonds of good and evil and who easy it is to be swayed . The author is sure to tempt and torture you all at the same time . So if you want a great series to read for your fall and Halloween read check out DEMONS BEWARE series . You will not be disappointed .