Well made it to Thursday , hope your week is going great and those getting ready for Thanksgiving . Today I have the sixth book in the Lily Harper series . NO GOING BACK  by H.P Mallory. 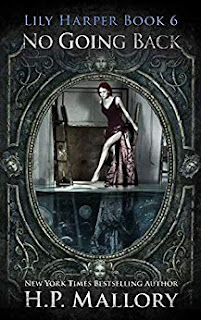 What’s the worst place in The Underground City? How about the Ninth Level, the Morgue?

After Lily Harper narrowly escapes the clutches of Alaire, the Master of the Underground City, she finds herself on the back of a winged Fury in the middle of the ninth circle, The Morgue, and she’s not sure where to go.

Tallis has been left to his own defenses in the eighth level, The Asylum, and Bill is MIA. Lily has no idea how to find either one of them or where to even start.

After she gets attacked mid-air, Lily finds an unconventional ally in the form of Manfred Albrecht Freiherr, otherwise known as the Red Baron. Manfred informs Lily that a civil war is brewing in the Ninth Level between a legion of rebel demons and the old-world order.

Lily finds herself smack-dab in the middle of this war, a war that’s encouraged by Alaire because, as usual, he wants something…

All Lily wants is to make sure her friends are safe but in so doing, she’ll find herself thrown into the thick of it where she’ll be forced into the fight of her life.


NO GOING BACK is the sixth book in the bestselling Lily Harper Series.

MY REVIEW
Welcome to the ninth circle of hell or as the people in the underground city call it the morgue. Lily is trying to find her way out with the help of a fury . She just doesn't know how to get out . Tallis is in his own kind of hell in the eight circle or as some like to call it the Asylum and well angel Bill is just gone MIA  and poor Lily doesn't know how to save either of them . Then when Lily ends up smack dab in the middle of a war all because Alaire wants something of her . Will she survive and will Tallis and Bill find her before its too late

The characters in this series just get better and better . Tallis is well he is just one sexy Scotsman . I love his no nonsense approach to things and how he will fight to get back to Lily and keep fighting . Lily is one strong woman she has been through so much and now she is harbouring a new entity in her body that is fighting to get out . She really does a good job keeping him under control . And then there is Bill , I love him , he is a hoot . He is kind of a foul mouthed angel who is always there to help out if needed . I truly love theses characters and have a big crush with Tallis . Yes I know but still the brogue is so sexy . You will love them too .

This is a fast read for me , I snuggled down and read it in an evening . The author has woven such a great story and universe that the story inhabits . I like the fact it feels like an updated Dante's inferno with the new levels that they are fighting through. The author throws in a few historical characters in this book that are there to help Lily out . I won't tell you who but you will laugh your butt off when you read them .  This is a great read and you should add it to your winter reading list . This series is so fun to read  and you will snort and sigh and maybe fall in love .
Posted by BOOKS TO CURL UP WITH at 12:36 PM