Good morning peeps HAPPY RELEASE day to one of my favourite authors . Victoria Zak has just released her third book in her Gracefall series . ROCKED AND BOTHERED . 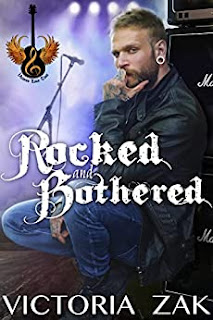 He fell for the one woman who could save his life

Not wanting to end up the next rocker cliché, Gracefall’s charismatic lead singer, Dylan Grace, falls back into his rocker world with a clarity he struggles to comprehend. His band members hire a life coach to keep him out of trouble and clean to make things worse. The problem is they employ the one woman who can bring this bad boy to his knees. Add strife within the band, and a corrupt manager to the mix may send Dylan over the edge.

She’s one heartbeat away from a heartache

Graduate student Dani Clark should have kept her nose in the books when offered the job of being Dylan Grace’s live-in life coach, but after his overdose, she can’t stand by and let him become another rock and roll causality. However, separating casual sex and falling in love turns out to be the biggest heartache when the rocker changes her life forever.

Dylan Grace has been through a lot and has paid the price . But he is back and doesn't want to become a rock cliche . He has done his time in rehab and wants to just get back to making music. His bandmates have a different idea they want him back but they want him to stay on the straight and narrow so they hire him a life coach  The one person that if she wanted to she could bring him to his knees . Dani is the one person that can keep Dylan on the straight and narrow . There is a past between the two of them that they can't deny the feelings that are stirring underneath the surface. With sex off the table and Dylan put in the friend zone can they really deny the feelings they have and will there be heartbreak for both of them and will Gracefall get the new record recorded .

Ok I am just going to say this once yes i squealed when I found out that Dylan was getting his own book .I love  Dylan and Dani . Dylan has had such a hard childhood and has drown himself in booze and drugs to survive . That made him the life of the party but also that rocker cliche where it took an overdose to settle him down . When you start reading his story you see a hurt little boy behind the facade of the rock star . He may come off as a sexy alpha man deep down inside he is scared to give his heart to anyone because he doesn't want to be hurt and abandoned again by the people who supposedly loved him. Dani has had to live the perfect straight as arrow life with her parents who are soap stars . She has had to hide parts of her from everyone even her friends . You really get to see her , she is stronger then we first see . She is feisty and also guarded with her feelings . She just wants to be loved and to love the man who has her heart for so long . You also see her when she doubts herself when an ex of Dylan's comes back into their lives . They both grow up through out the book and we find out so much about why Dylan is the way he is . We also get to see more of the Gracefall guys and their significant others .  I truly love these characters they are very well written and each character is complex .

This is one of those books that start off with a bang and boy do i mean a bang . The author does the opening scene in typical rocker style . I read this book in an evening and I was sucked in by the end of chapter one well just because Dylan has always been one of my favourite characters .  There were plenty of laughs and misunderstandings through out this book . There were moments where I really wanted to slap Dylan upside the head with a frying pan and then there were moments that I wanted to hug both of the main characters and tell them that everything will be ok. This is a fast read that has a lot of ups and downs and you will love each and every page . I can't wait to see who the next book will be about I am crossing my fingers it is going to be Tyler's story . So if you want a great series about rock and roll but more about family check out this series . I promise it will add some fire to your summer reading list ,