Well it is already Wednesday , I have lost a day because this past weekend was a long weekend so we had Monday off . So to me it really feels like a Tuesday but enough of that . Today I have for you book 17 in the Haven Hollow series .  RAISING CAIN  by Hp Mallory and J.R Rain 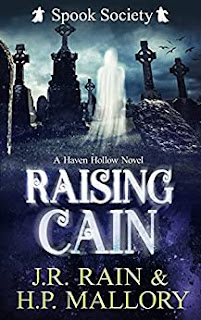 My name is Darla Rowe… well, it used to be Darla Fenton before Wanda’s magic went haywire, and she managed to turn me back into a real, live, honest-to-goodness dame again.

Once that happened, Lorcan let me borrow his last name, like the real sheik of a fella he is.
Not only am I learning to be alive again, and one hundred years after the first time I tried my hand at it, but it’s looking like I gotta find me a job, so I can start earning some cabbage of my own.
Life ain’t too ritzy when you’re on the nut, if you know what I mean…
After medium, Bailey, sets me up with an interview with the big cheese of Spook Society, owing to my otherworldly connection to spooks; imagine my surprise when that hard-boiled bossman hires me right on the spot!
But it quickly turns out this gig ain’t the duck’s quack I thought it was gonna be.
Why? Because I’ve been hired to let some uptight, flat-tire of a copper named Cain Morgan possess me so he can finish working a case that got stalled when he got bumped off a year or so ago.
As if that weren’t enough to ruin a broad’s day, guess what? There’s more.
This case I gotta work with Cain; it’s a murder case—a double one. And that no good perp is still out there!
I ain’t about to risk my second life (after the first one ended so tragic), but it’s looking like I also ain’t got much of a choice.
MY REVIEW
Darla is well she is alive and kicking again , after Wanda turned her back into a living breathing woman her life is well getting sticky. She has to get a job to pay her way and what does she do but when she gets hooked up at the Spooky Society. Where her connection to the other side she will be valuable . When she gets hired she has to work with Cain Morgan a police office who possesses her and now they have to solve a double homicide . She doesn't want to risk her second life but will she survive to see another day.
Oh my god these characters are so much fun to read . Darla  is hilarious as she tries to navigate her way through this world . She is feisty and sassy and really puts her talents to the test . She is also a cheeky wench that throws around her 1920s slang all day long . Cain well he is a man who wants to get the job done , even though he isn't really here . He is straight laced comes off as grouchy most of the time. They are stuck with each other literallyas he is possessing her . Which honestly makes for some hilarious situations in Darla's life . These characters are well written and you will love them.
This I think might be one of the funniest books in this series . Darla alone is such a hoot and the things that come out of her mouth will make you laugh so hard . The authors really made Darla likable in this book . I started this book and couldn't put it down . The authors really take us on a fun filled ride . There are moments in the book that I had to think about what Darla said because her 20s slang took a min to understand but once I got it the book flew by . The Haven Hollow series just keeps getting better and better . So if you want a fun filled read check it out
Posted by BOOKS TO CURL UP WITH at 8:09 AM