Good afternoon everyone , it has been a long week here on the farm . Today I have the 4th book in the Fitz series . I'M NOT YOUR DIFFERENCE  by Theresa Sederholt . 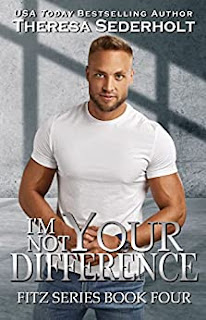 Andy Justice is a single dad, trying to teach his daughter, Stella, how to live in a world without labels . . . to love and be loved for who she is. To value family and friends, and always be kind. The lesson may not seem extraordinary, but when you’re a single, gay man, battling Parkinson’s who’s adopted a deaf girl orphaned because her mother was murdered, it has a lot more significance in the meaning.

These two have become the perfect medicine to heal each other’s heart. Andy just never thought he would be doing this alone. His husband, Stephen, was not on board with raising Stella. Between Andy’s illness and the special circumstances surrounding Stella, it was all too much for him. So . . . he walked away.

Just when Andy has settled into his new life with Stella and feels ready to give his heart another chance at finding love, Stephen unexpectedly contacts him and asks to meet. Andy agrees, if only to have his say, something he never had the chance to do before.

When the meeting happens, Andy finally feels the confidence to move on. Stella is his focus now, and even though Stephen will always have a place in his heart, he finds his closure. However, things are completely opposite in Stephen’s world, as seeing Andy only confirms what he’s been afraid to admit all along—he’s made a huge mistake. Now he has to do everything possible to win Andy back, to have the future that was always meant to be.

While Andy and Stephen are working on whether they will have a future together or not, a serial killer, who is targeting gay men, has other plans for them both.

There’s only one man who can put all the pieces together in time to save them—Fitzgerald “Fitz” Rodriguez.
MY REVIEW
Fitz and the family are back , Andy is trying to get his life back in order after Stephen left him and his daughter alone . Andy's illness and trying to take care of a young girl was just too much for him he walked away . Leaving Andy devastated and trying to come to terms with Stephen leaving . Once Andy is back on his feet taking care of Stella and moving ahead with the help of Fitz and Mj he is ready to move on . Stephan comes back and wants to work it out but will he be abled to trust him and figure out what he wants . While they are working things out there is a serial killer is out there preying on gay men and he has Stephen and Andy in his sights . Fitz is on the case an will do anything to keep his family safe and catch the man before he decides to kill the two men .
Omg I was so excited to find out there was a fourth book in the series . Fitz is the man that you want to be friends with , he is strong willed and will do anything to keep everyone safe . Andy well he is the center of this book and we see a strong man who is coping with a disease that has a death sentence and taking care of the light of his life . You really get to know more about him in this story . He is stronger then people believe , he is a fighter and he loves his family and his friends . Stephen we see him at his lowest point and we see that he is conflicted between standing up and living his life his way and bringing Stephen back into his life . There are so many characters that come in and out of the story . They are all truly amazing each character is well written and complex. You will love them .
Ok I was so excited  when I heard that Fitz was getting another book in his series . This series is one of my favourite series out there . The characters are so well written and complex and you will fall in love with them . I dove into this book and couldn't put it down I got sucked in to the story from the first chapter .  I am going to warn you that the author goes dark and there are some graphic scenes that might put you on edge . I totally enjoyed this book and can't wait to see where the author takes these characters . So if you want a great story for the summer reading list .
Posted by BOOKS TO CURL UP WITH at 1:13 PM