Good Monday morning everyone ,hope you all had a wonderful weekend . I sure did . Today we are reviewing THE LAZARUS EXPERIMENT  by Mark Gegasperi. 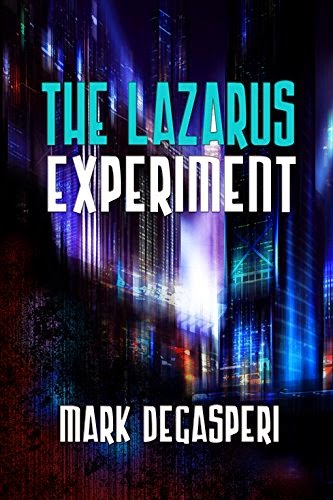 In the year 2084, a scientist-scholar wakes up from a coma to find himself the prime suspect of the murder of his mistress. He struggles in the stark world in which he regains consciousness to reconstruct relationships with his young son, and the wife with whom he was in a faltering marriage – even as he himself cannot remember if he had any part in the gruesome crime; nor even the circumstances of the fire in his lab that nearly killed him. He must race a dogged policewoman, who seems to believe that he is the killer from among a list of suspects, to learn the shocking, whole truth – before his family, and his own life, are destroyed.
MY REVIEW
Welcome to the year 2084, Dr. Jonathon Kelton has just awoken from a year long coma. After being blown up in his lab.
Not remembering anything he is under the care of Dr Oskar Rose who basically rebuilt him. As he recovers his memories slowly come back to him . He is up for murder of his mistress and his family is falling apart and he has to fix his relationship with his young son.  He races against time and the police to find out the truth before his life and the life of the ones he loves are destroyed forever.
This book is set in the future but really not that far when you actually think about it . This is was a real page turner for me . I couldn't put this book down. I so wanted to get to the end to find out what the heck happened and wanting to find out who the killer actually was. But then there is the dread that I have when I am into a good book . The dread that the book will come to an end. Then what would I do
The characters are so well written and you want to help Johnathon out so badly . You can feel his frustration as he tries to piece his life back together and build his life back up. As you dive into his character you really have this feeling you can't shake . Is he an innocent man or a cold blooded killer. The author takes us on such a ride. You just never know as you read  along. You also get a real funky mad scientist vibe from Dr. Oskar Rose. Which to me added a lot to the story line . There are some graphic sex scenes and the F bomb is dropped a few times but it doesn't sway from the story at all.
This is an edge of your seat read for anyone who loves crime and sci fi readers . You have the best of both in this book. You will be reading this book well into the night. Trust me you will not figure this out until the end and then you will be shaking your head going what the heck just happened . You will be so lost in this book that time will fly. So if you want a great read that will make you think. This is the book for you.
Posted by BOOKS TO CURL UP WITH at 8:34 AM