WOOOOHOOOOOOO its Friday the trailer if packed for the weekend my books are bought for some pool reading . Today we are going to review a debut novella by G.E Rome  SKINS . 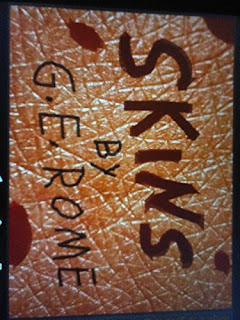 Officer John Bluger. A rookie detective that comes right out the academy. Stumbles upon the most gruesome murder scene ever witness in his city. John along with his Lt. Liz McCaffin must race against time to catch this deranged killer before he kills again.


MY REVIEW
I must admit this story really intrigued me when I first saw it. The cover alone says creepy things are going to happen . Meet rookie detective John Bluger , a by the code guy who is just fresh out of police academy . He is thrown into a really gruesome case involving murder . Will he an his partner solve the crime before he kills again
I started reading this book and was like the characters are really good and the story is a really great concept . The character of John is kind of complex . he is just out of the police academy and he stumbles upon a murder . He is kind of cocky at fist but you see him get humbled as the story goes on
His partner is a bit of a strange duck and you have to watch out for her . She is kind of shady and you just can't get a read on her . They work the case together and  well I will leave it there cause there is a twist that will blow your socks off at the end .
There were a few spelling errors that need to be corrected and the first chapter that needs to be stream lined . Over all I really liked the story line and the characters will tug at your heart strings . I believe it could of been a bit longer so he could of gone more in depth on the character building . Other then that the story was really good and such a twist at the end is a great way to end it . So if you want to take a chance on a short story that will leave you thinking check out SKINS  G.E  Rome
we give this book a 3.5 stars out of 5
Posted by BOOKS TO CURL UP WITH at 1:39 PM