Good Thursday all , today we are going to review DEMON WITH A COMB OVER by Stuart Weist . 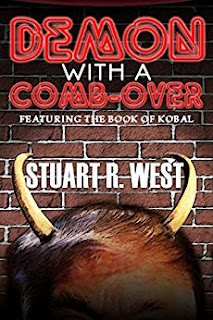 Laugh till it hurts!

There are few things in life worse than being a bombing comedian in an empty club, unless you pick on the one person in the crowd who happens to be an ancient demon who can make your life a living, ironic hell.

Stand-up comedian Charlie Broadmoor has a hell of a time coming up with new material while terrorized at every waking moment by a poorly-coiffed, thin-skinned eldritch evil whose appreciation of humor is dwarfed by his monumental pettiness. Charlie quickly learns that making light of the supernatural is no joke. It’s Seinfeld meets Milton in this uproarious tale of fear and laughing by Stuart R. West.

This edition also features The Book of Kobal, giving the reader a glimpse into the origins of the short-tempered demon.
MY REVIEW
Charlie is having a bad day a really bad day . He is a comic but honestly not a good comic. He is bombing at being a comic , Until the night he picked on the wrong person . Don't ever mess the guy with the comb over , he might just be a demon that can make your life a living hell.
So begins the twisted tale of Charlie and his dissent into hell . The author takes a very humorous take on the horror twist . I like how the author added humor to the horror genre in a good mashup. The main character Charlie is such a fun character to read . He is such a messed up mess and it takes awhile for him to realize that he is being tortured by a demon . He just goes about his business and while bad things are starting to happen . Kobal is the demon who takes on Charlie . He is one grumpy demon. He has had a hard life and is taking it out on Charlie .
The story has a great mash up of horror and humor . The author takes us on a ride that mixes humor , tragedy . horror and drama . The characters are well written and the story is fast paced . You will be rooting for the good guy . But honestly you start to think he isn't going to come out of it alive . You will be embroiled in the characters and the story . I will say this you will have to read the book to see if Charlie and his daughter make it out alive . Also what happens to Kobal . You will be surprised .
Posted by BOOKS TO CURL UP WITH at 8:09 AM