Welcome to Wednesday, hump day . Today we are going to review THE CHALKMAN by C,J Tudor this is her debut psychological suspense book 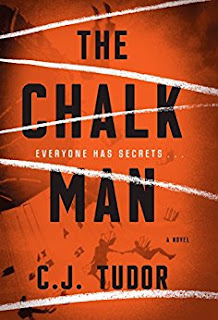 In 1986, Eddie and his friends are just kids on the verge of adolescence. They spend their days biking around their sleepy English village and looking for any taste of excitement they can get. The chalk men are their secret code: little chalk stick figures they leave for one another as messages only they can understand. But then a mysterious chalk man leads them right to a dismembered body, and nothing is ever the same.
In 2016, Eddie is fully grown, and thinks he's put his past behind him. But then he gets a letter in the mail, containing a single chalk stick figure. When it turns out that his friends got the same message, they think it could be a prank . . . until one of them turns up dead.
That's when Eddie realizes that saving himself means finally figuring out what really happened all those years ago.
Expertly alternating between flashbacks and the present day, The Chalk Man is the very best kind of suspense novel, one where every character is wonderfully fleshed out and compelling, where every mystery has a satisfying payoff, and where the twists will shock even the savviest reader.

This is the type of book where you sit down and start to reading and don't put it down until you are done . This book is sent in a small town in England but I will tell you this isn't a sweet cozy mystery . This book bounces between 1986 and 2016 following a group of kids and the aftermath of murder in a small town .  Eddie and the gang are hanging out in a small town in England . They have a secret code of chalk man to let them know where to meet and so on . But things aren't so rosy they have their enemies and their bullies . Oh and the creepy new teacher that seems to be showing up wherever they are . Now bounce ahead to 2016 Eddie is all grown up and teaching in a small school. Thinking life is pretty good until the day a letter comes for him with the drawing of a chalk man . His friends have the same letter all thinking its a joke until one of them dies .  Will Eddie be able to figure everything out and save his own life
The characters in this book are very well written and complex . Eddie is actually a pretty screwed up he has a lot of insecurities .  His buddies are a mixture of the big funny guy and the loner . They kind of remind of the goonies with a darker twist . The creepy teacher is well just creepy . He is one weird dude . The cast of characters are well written and you will fall in love with them and also hate some of them at the same time .
This is a well written book that will keep you on the edge of your seat . Over all I really enjoyed reading but there were times when I felt that it dragged just a little . Especially in the 1986 part of the story. It just seemed to lag a little bit . Overall this book had me on the edge of my seat and the twist at the end had me going WTH  never saw that coming . So if you want a book that will give you a bookhangover and have you going never saw that coming . Check out CHALK MAN you won't be disappointed .