Good Friday morning everyone . After 2 days off for a migraine and hotter then hot temperatures . I am back and today we are going to review PRETTY WITCHES ALL IN A ROW a NICK GIBSON NOVEL. By Lisa Olsen 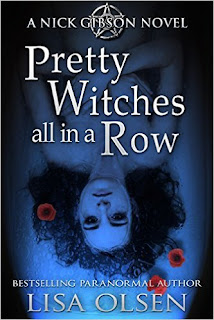 Someone is picking off a coven of witches one by one. Can Sgt. Nick Gibson and his team of detectives catch the killer before he loses the pretty witch who's got him under her spell?

Nick must cast aside his disbelief and delve into the world of the supernatural to solve the case. On hand to help is Annaliese, a member of the coven who claims to have had a prophetic dream at the exact time of each victim's death, offering clues to the identity of the killer. Can he accept the 'proof' offered by unconventional means or is she deliberately leading him astray to hide her own secrets? To cloud the issue, a local evangelist is telling anyone who asks that the victims had it coming. Is religious mania the motive for murder, or is it something more personal?
MY REVIEW
This is the first novel I have read by Lisa Olsen ,  Let me introduce you to Sergeant Nick Gibson. He and his team of detectives are hard on the case . They have to unravel the serial murders of a coven of
witches .  There is just one little problem , he doesn't really believe in witches .  Then along comes Annalese the pretty little witch , that could be next on the hit list . As they work together he finds himself falling for the pretty little witch. Even though he doesn't believe in magic. They are thrown together and falling for each other , but will they survive the murderer and the publicity .
Lisa Olsen is a great new author that I just recently found . I have had this book on my tbr list
for awhile.  I have been hearing such good things about it . I decided to find it on my list and start reading.  Once I started reading I couldn't put it down. it was such a good read . The author took us on roller coaster ride. The way she introduced us to the Wiccan way in such a great ease. The story flowed with such ease . You will get lost in the story. It is a great mix of murder and romance .
Her characters are well developed and you can't help but fall a little for Nick,  He is your hot sexy cop. He is a family man that has been through some hardships after his wife up and left him and his daughter. They have a good life now . But something is lacking like a true love .  He is the type of guy that you just want to well basically want to climb like a spider monkey . Trust me you will fall a little for him and he easy charm and charisma. Annalese is the young lady/witch that captures Nicks eye as he start the case . She is a straightforward sassy lady that has her own secrets to hide, But they seem to be good for each other . The supporting cast is so well written they compliment the main characters very well. From the coven members and the crazy pastor saying they deserved it .
I am so glad that I read this book , I read it in a day and a half . I fell in love with the characters and the story . The author weaves such a great story that will have you turning the pages well into the night. Trust me you will fall for Nick just a little and will cheer for them and you will want to strangle the pastor and you will scream at a few scenes and you will cry and laugh. This should be added to your summer to be read list . Great for a day by the pool . If you want a great paranormal story full of intrigue and some romance, this is the book for you . So check it out ,You won't be disappointed in the least .
Posted by BOOKS TO CURL UP WITH at 9:36 AM