Good Wednesday morning all I hope your hump day is going well so far. Today I am going to introduce you all to a new author to me Scott Carruba and his dark urban fantasy . DANCE OF THE BUTTERFLY. 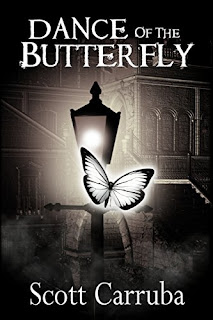 A modern dark urban fantasy, telling of two powerful families who uphold a secret duty to protect humanity from a threat it doesn’t know exists. Though sharing a common enemy, the two families form a long-standing rivalry due to their methods and ultimate goals. Forces are coalescing in a prominent Central European city- criminal sex-trafficking, a serial murderer with a savage bent, and other, less tangible influences. Within a prestigious, private university, Lilja, a young librarian charged with protecting a very special book, finds herself suddenly ensconced in this dark, strange world. Originally from Finland, she has her own reason for why she left her home, but she finds the city to be anything but a haven from dangers and secrets. Book One in a planned series.


MY REVIEW
This is a very interesting book. I started reading it in the evening and struggled with it at the beginning . The first couple of chapters were a little hard to get through. So I put it down and thought I would start fresh in the morning . When I dived back into the book and got through the first two chapters . I found this book to be very interesting and I really got into the story line. The rivalry between the two families is very powerful and all because of old books and lore . They have very different methods of keeping the book safe . Lilja a young librarian that is entrusted to keep the book safe. Will she survive and will the book be safe
The characters are vast and in this book . They are complex and well written.  Lilja is a complicated lady  she seems so sweet and innocent at first but as you read you find out she is quite kick ass .Another notable character is Skothiam Feltcraft. He is the patriarch of the family that is in charge of keeping the three books safe. He is fighting relentless evils with a team. He is a very strong character but you can see the weight of the world is on his shoulders . He works hard to keep everyone safe . There are so many characters in this book and they all play an important part in keeping the story going
This book has so much going on with so many twists and turns . You sometimes don't know if you are coming or going. The author takes us down some pretty dark pathways especially with the sex trafficking aspect of the book . There is a touch of BDSM also in the book which to me was kind of off putting. I wish the author could of went into more about the books and the lore behind them . Also more into the rivalry of the two families . I found that to be a lot more interesting and sucked me in big time . Also a few times when I was reading I didn't realize what characters were in the chapter until almost the end of the chapter.
Overall I did enjoy this book, the author has a way with words that will leave you breathless and wanting more . He will keep you on the edge of your set and make you want for more . I will say this is the first book in the series so it does have a cliff hanger . So if you want an intense dark urban fantasy  that will take you on a rollercoaster ride . Check out DANCE OF THE BUTTERFLY by Scott Carruba
Posted by BOOKS TO CURL UP WITH at 8:40 AM