Well it is hump day Wednesday in a short work week and it is already the seventh of September  . I am excited for all the new books coming out . Its time to snuggle down with a good book and a pumpkin spice latte.  Today's book is KISS OF THE SUN by R.K Jackson. (Martha Covington series book 2) 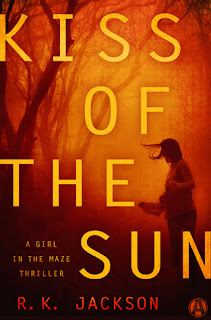 In a haunting novel of psychological suspense from the author of The Girl in the Maze a gifted young woman battles her own mind . . . and finds that some voices will never be silenced.

Following her diagnosis as a schizophrenic, Martha Covington has been easing herself back into her quiet life on a small island off the Georgia coast. The trouble is, Martha’s research into local healing roots has earned her an unfounded, and frankly unwelcome, reputation as a psychic. But when an elderly couple from Atlanta tracks her down, desperate for any sign of their missing grandson, Peavy, Martha confronts a terrifying possibility: that the line between intuition and insanity may not be as clear as she’d like to believe.

First comes a spine-tingling vision that feels too real to be imagined. Then Martha receives a message in her dreams that the boy may yet be alive. Despite her therapist’s insistence that it’s all in her head, Martha travels to Atlanta to investigate Peavy’s mysterious disappearance, where she is reunited with handsome law student Jarrell Humphries. A trail of cryptic clues leads the pair deep into a heart of a dangerous conspiracy whose members will stop at nothing—including murder—to protect their secrets.

MY REVIEW
This is the second book in the series and I was so excited when I found it . This is a new adventure for Martha and Jarrell . As you start reading we find Martha settling into her new life on the small island off the coast of Georgia. She is slowly settling in and has earned the uneasy title of being psychic.  After a chance meeting with an older couple throws Martha back into the cat and mouse game of finding a missing child . Along with Jarrell they uncover a ruthless organization that will not take no for an answer.
I fell in love with Martha in her first book Girl in the Maze and that love continued in this book. Martha is a complicated woman who is trying to get better. She is plagued with the voices in her head and the images that they conjure up. You see her overcome a lot in this book , she become stronger and more courageous as the story unfolds . She also has the first inklings of love for someone who is very close to her. Jarrell isn't the same man from book one, he is in Collage now and on his way to becoming what he always wanted to be. He still cares for Martha and you actually see that grow into a love as they work together to uncover the secrets of the medallions and find out what is going on with the murders . There is an evil but you honestly don't know how or who it is until the ending . I didn't even realize that it was who it was until the scene in the compound . Who knew evil could be that evil and still have a smile on your face .
The first part of this book started out with a bang and had me sucked in big time . I love the characters and I loved the direction the author was taking us. The story flowed great and the author was taking us on such an adventure . But the second half of the book got a little confusing and it kind of felt rushed and choppy. I wanted the ending to be a little different . I am hoping that book three will answer my questions of Jarrell and Martha and their relationship.
Over all I really enjoyed this book and loved the mystery and the romance. There are some fun time and scary times in the book. The author does wrap up some loose ends from book one but then opens up a new can of worms for us to fret over . I did get this book done in one day and I couldn't put it down.  So if you want a good series to read check them out . You will be in for a fun filled ride