Happy Thursday all . today we are going to give you three for the price of one . Today is all about MAGIC AND MAYHEM. The three books from Donna McDonald for Robyn Peterman's kindle world .
First up is HOW TO TRAIN A WITCH (A BABA YAGA SAGA BOOK 1) 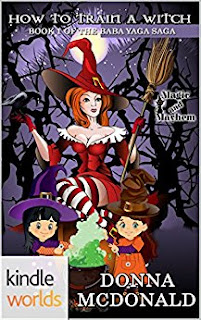 She’s the Jezibaba, not the Jezibooboo. Sleeping with Professor Hottie is out of the question… or is it?

After three hundred years of keeping the magical peace in the world, Jezibaba is a hundred years past being ready to hang up her witch’s hat. The Council of Witches still can’t be trusted but she will happily step aside to leave their treachery to her successors to punish.

Two new witches—two Baba Yaga—have been chosen as potentials to take her place. Yet before she can thank Morgana The Red for helping her survive long enough to retire her wand, Jezibaba uncovers one major snafu in the cauldron’s prediction… the Chosen Ones are still children.

One way or the other, she’s going to protect the girls, kill their would-be killers, and then she’s going to torture each member of the Council until she discovers the traitor funding the attempts on their lives. What she is not going to do is sleep with a sexy dragon just because he wants to help. She and Professor Hottie have way more in common than the magical world is ready to know.

MY REVIEW
Omg this book had me laughing and snorting from the very first page.  Meet Jezibaba the chosen one that keeps all magical creatures in check . She finds herself baby sitting the chosen ones , the ones that are suppose to replace her . She wonders how she is going survive protecting the two girls and it doesn't help that there is a sexy as sin dragon shifter that gets her blood boiling and her heart racing . Its all in a days work for the Jezibaba .
I absolutely loved these characters . Jezibaba is a cocky witch that has been through a lot in 300 plus years. She is bossy, brash and just fun to be around . She doesn't take any flack from anyone . I love how she is . The only person to knock her off her game is the man she called professor hottie. Damon Smoke . who is a dragon shifter and one hot sexy alpha man . That can blow smoke all over me and dang time he likes . Then there is Hildy and Carol the two chosen ones . Hildy loves to turn people into toads when she gets angry . Carol is well she is just a little mean and kind of spoiled . They are a handful  and typical 10 year olds .
This is a hilarious book that will keep you up reading . There are some twists and turns that will keep you guessing if every thing will work out . So if you want a laugh out loud book check out HOW TO TRAIN A WITCH
I was given this arc and here is my  honest review 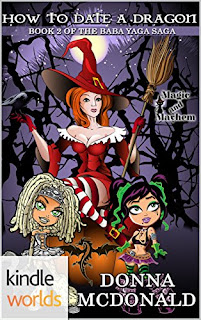 There were rules for dating dragons. The most important of all? Don’t get burned.

Instead of the Jezibaba, in the last eight years she’s become the Jeziblahblah. Dating her sexy academic dragon should have keep her mentally sharp, not caused her to drop all caution just because he looked good naked. She was getting soft. There was no doubt about it. When a young troublemaking dragon named Thane starts causing problems for Carol and HIldy, she’s the only one concerned.

She wasn’t the mothering type—no argument—but she was still their protector. Her instincts were flashing warning signs about the young dragon and she was not going to ignore them no matter how innocent Damien believed he was. She no longer had the luxury of pretending she’d found a perfect love. Instead it was time to face reality. She’d dated a hot dragon and gotten burned for giving him her heart.

With Thane still free to cause trouble, and Damien still not believing he was, her loyalty the disloyal dragon might end up being the worst mistake she’s ever made in her life.

MY REVIEW
Welcome back to the chaos of Jezibaba , Hildy an Carol and the rest of the gang . Its 8 yres later and Jezibaba and her hot dragon have been going great guns and the girls are growing up to be very powerful witches. Will a misunderstanding be the end of the couple and who is the new nemesis that is trying to kill the young witches .
This is the second book in the series is just as funny or even more hilarious then the first . Poor Jezibaba is having a bad time of it . Loving her dragon is making her soft and throwing her off balance . Its also cool seeing the girls grow up and come into their powers . But there is a new threat in town that is reeking havoc and trying to kill the girls . There is fighting, love lost and maybe some love found . There are some great twists and turns that will keep you reading . Its a fast read and you will breeze through it in no time . Check out the second book . It can be read as a stand alone but I suggest you read them in order

BOOK THREE IN THE SERIES Magic and Mayhem: To Yaga Or Not To Yaga (Kindle Worlds Novella) (Baba Yaga Saga Book 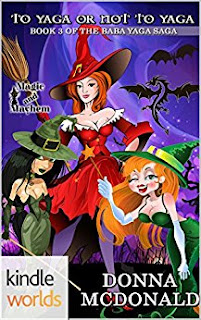 To Baba Yaga or not to Baba Yaga? That was the big question.

Too bad no one knew the answer. Carol and Hildy were being tested, but evidently so was she. She was still the Jezibaba, yet all she could do was watch and worry while two people she deeply cared about went to meet their fate. What if that fate meant fighting demons? What would happen to all of them if the Chosen Ones failed? Morgana was threatening to make her immortal. That was definitely not a good sign.

As if the whole Baba Yaga thing wasn’t trouble enough, she kept tripping over a wicked fairy Morgana made her set free. The situation set her instincts singing, but she had no one to talk to about it. She and Damien were still together—sort of—but the emotional distance between them had worsened over the years.

There was no time to learn meditation, but she still had to somehow find a place of calm. Until she officially retired the Jezibaba position, she couldn’t take on any additional challenges. Her current chaos was enough to send any stressed witch on a no holds barred zapping spree.

MY REVIEW
In the third and final book of the series we find the girls having their final witch tests before they can become THE BABA YAGAS so Jezibaba can retire .
Lets just say that mischief and mayhem ensue as Hildy and Carol are put into a situation that will truly test their friendship and their witchiness .
The characters have grown so much in the three books . I love all of them and the hilarity that has happened through out the whole book will have you laughing all night long . There is also lots of romance in this book new loves are found and an old love is rekindled .
So if you want a great story that you will be cheering about check out TO YAGA OR NOT TO YAGA