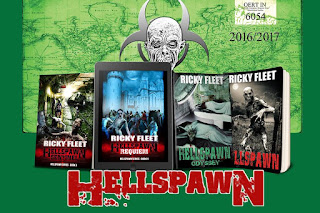 Today we are going to review the fourth book in the HELLSPAWN SERIES by Ricky Fleet . HELLSPAWN REQUIEM  is out today 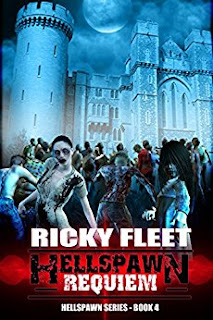 Blood from the epic battle stains the ancient stone, shed from both the living and the dead. The massive castle walls provide a period of respite from the unending terror and the group can finally honour the fallen. As Kurt and his family count the cost of securing their new sanctuary, new friends have joined the fray. Only by pulling together can they hope to have any kind of future in the apocalyptic world. A few short miles away, the psychotic lovers receive a victor’s welcome. Craig Arater, older sibling to Mike, rules the prison with an iron fist, meting out brutal punishments to those who fail him. Designed to keep the worst of humanity locked away, now it provides a haven for the evil in men to thrive. Winston has chosen a different path from his murderous companions. Faced with an uncertain future in the prison or solitude amongst the dead, he chose to go it alone. A rumour about the castle and its inhabitants gives him hope. The journey that awaits, however, will be more dangerous than anything he has faced before.

MY REVIEW
Have you ever had a book that  you start and finish on the same day ?  Well this was the book that did it for me . I started this book in the morning and had it finished by supper time  and I was blown away . The series was great to start with but this book blew me away . Kurt and the gang keep getting better and more complex and don't get me wrong but I kind of cheered when Debbie got what was finally coming to her . They are finally getting settled somewhere safe behind the castle walls , with the help of their new friends and allies .  Debbie and Mike end up at the prison , where his brother is the leader . Will they survive the dead but also will they all survive the living.
What I love about this series of books , they have everyday people as the main characters . They aren't superhero men . They are a family trying to survive and they do it with their wits and their love for each other . Kurt has grown so much over the course of the books . You see him become the leader with a conscious . He has done some horrible things but he did them to help his family survive . Everyone has grown during this book . We see them thrive and survive .  On the other side of the table I was actually kind of glad that Debbie is finally getting a little of what she has dished out. I mean its nice to see her actually be scared  Winston is such a joy to read, he is a force in his own right . You have the overweight kid who just played video games come out swinging and claiming his place in the apocalypse. There is a new cast of characters that come in and you will love them all . Well most of them the others  you will hate . Especially the characters at the jail .
This series of books came out running and in hellspawn requiem is no exception . You are taken on a journey with the characters .  You are thrown into the middle of the battle and you fight right along side them. There are plenty of omg you didn't and holy what were you thinking in this book . You will laugh and shed a tear . I strongly suggest you have a Kleenex on hand for some parts . The author paints us a picture of what the world would be like  if the world came to an end .  Just be prepared to get sucked in and hooked . You will cheer for your favourite characters and also shed a tear or two. So if you want a series that will have you cheering and wanting more . Check out the HELL SPAWN SERIES and  read HELLSPAWN REQUIEM .
Posted by BOOKS TO CURL UP WITH at 7:53 AM