Good Monday all . I can't believe that there is only 6 days left until the big guy comes . If you are still wondering to get the book worm in your life I might have a book for you . ARE YOU SLEEPING by Kathleen Barber . 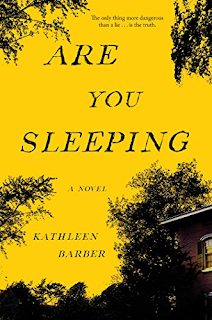 Serial meets Ruth Ware’s In A Dark, Dark Wood in this inventive and twisty psychological thriller about a mega-hit podcast that reopens a murder case—and threatens to unravel the carefully constructed life of the victim’s daughter.The only thing more dangerous than a lie...is the truth. Josie Buhrman has spent the last ten years trying to escape her family’s reputation and with good reason. After her father's murder thirteen years prior, her mother ran away to join a cult and her twin sister Lanie, once Josie’s closest friend and confidant, betrayed her in an unimaginable way. Now, Josie has finally put down roots in New York, settling into domestic life with her partner Caleb, and that’s where she intends to stay. The only problem is that she has lied to Caleb about every detail of her past—starting with her last name. When investigative reporter Poppy Parnell sets off a media firestorm with a mega-hit podcast that reopens the long-closed case of Josie’s father’s murder, Josie’s world begins to unravel. Meanwhile, the unexpected death of Josie’s long-absent mother forces her to return to her Midwestern hometown where she must confront the demons from her past—and the lies on which she has staked her future.

What would you do if your life is all of a sudden splashed all over a podcast . The life you tried to keep quiet from your boyfriend .  That is what has happened to Josie Buhrman . After trying to hide her past and all the craziness that happened after her father was murdered . When a podcaster starts to investigate the murder of her father . This opens a flood gate of emotions and Josie's world starts to fall apart as she heads back to her home town to get to the bottom of lies and misgivings
This book was a really interesting read . Most of the story is told in Josie's point of view and it is her coming to terms with what is happening and has happened . The author also has the point of view from Poppy and the podcasts . It was cool that the author posted them as facebook, twitter and other social media comments . It added a more realistic edge to the book .
The characters were well written but i did have a little bit of trouble connecting with Josie and Lanie . Josie at the beginning felt just a little wimpy . She hid and didn't want to deal but she did redeem herself and grew a back bone . She did have a lot of trauma to work through . She became a stronger person as she worked through everything and everything started to come together . The tension between Lanie and Josie is so deep seated . Josie has so much hatred for Lanie . Lanie is the character you want to shake and say wake up and smell the coffee you are hurting everyone around you . You want to feel sorry for her and hug her but you can't because of all the crap she pulled on everyone when she was younger . Now Poppy you really just want to slap her and tell her to get a life . She is pushy and smug . There are things that she does that are well not really popular with Josie and the family .
The author takes us on an emotional roller coaster ride that will get you thinking about what the media can do . I enjoyed reading this book and the twists and turns were really good . The red herrings thrown in to lead us to other characters where good . But there were a couple of time that i felt it was dragging just a little but not enough for me to put the book down . Over all this is a good book that will take you on the ride of your life . I bet you won't figure it out until the last chapters . So add this book to your Christmas list . It is a really good first novel for this author can't wait to read more from her