Good day before Valentine's day all . Today we are going to review MOON MOURNING  a Samantha Moon Origins book 2 . by J.R Rain and Mathew Cox 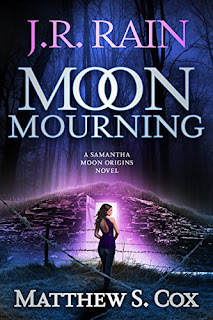 Coping with being attacked and left for dead isn't easy, but Samantha Moon is grateful that she survived―until she suspects she didn't.Vanishing from mirrors is only the first of a series of bizarre events that defies explanation, even to her trained investigative mind. A severe allergy to the sun, alertness at night, inability to eat food that isn't blood, and worst of all: she can't remember the last time she needed the bathroom. Of course, it's not all bad. Years have fallen off her face, her hair is perfect, her senses are honed, and (assuming she hasn't gone crazy) she can even see in the dark.It's all too much to process, so she does the only thing that makes any sense: tries to go back to work.A huge hat, shades, and half a bottle of high-test sunscreen later, she's back out inspecting properties with her partner Chad. Her first day, she suspects a HUD recipient of having undeclared income. Determined to cling to the career she worked so hard for, Sam traces the money back to small-time arms dealers selling big-time weapons. Everything seems to be routine until her sluggish reflexes get someone shot―and her husband suffers an emotional breakdown.Worse, she faces a more insidious and dangerous enemy than an apocalyptic militia group with military hardware...Daytime.

This is the second book in Samantha Moon's story , she is left for dead after being attacked .  She survives and there is something different about her . She is not the same person , she is sick and has an aversion to light and wants to eat everyone . But she tries to be the same person she was before the attack . Will she survive the militia group she is after and most of all will survive the daytime .
This is the second book in the origins story line . I must say that I was happy to read about the accident that turned Samantha . The author does a great job in show casing the characters and taking them to the way they are in the first of the Samantha moon books . The characters are well written and we get to dive into them a little bit better . We see Danny as a husband hurting by what happened . He is so torn and wants to help and does but he is also scared for his wife and his children . He doesn't really start to act like a douche until the end . He is a great flawed character .
Samantha is such a great character she is strong and fearless but also flawed . Watching her come to terms  with what is happening does tend to set off a giggle every now and then . The extra strength sunscreen and the big floppy hat make her sound like a old time movie star .  She does come to terms with what is going on with her and man she kicks some butt . She comes into her own and its great to see her start her business and realize that she can do it and more .
This book was co-written and the authors did a really good job combining their writing styles. The twists and turns that they take us on will have you on the edge of your seat while you are screaming at you kindle . There are some great loving moments that will have you going aww . Especially the scenes with Samantha and her family. They are emotional and sometimes a little tear jerking . There were a few spots where I felt if kind of dragged a little but over all I really enjoyed the story and the characters . To see how things got to where they are .  This would be a great book to read before you hit the series . So if you want a good book about how a family survives one being turned into a vampire and the aftermath . This is the book for you , be prepared to laugh and yes scream at your kindle a few times .