Happy Tuesday all , I hope all my Canadian readers had a great long Thanks giving weekend and you are all recouping nicely . Today we are going to go a different route and review a cool graphic novel I found read and actually forgot about . I reread it today and fell in love with it again . THE DAMNED Volume 1 by Cullen Bunn 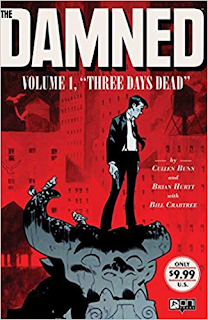 During prohibition, gangsters grew rich on our vices, and rivalries between criminal organizations resulted in open war. But unknown to the masses, a more sinister power controlled the crime cartels, using greed, gluttony, lust and other sins to fuel a more lucrative trade: mortal souls. Enter Eddie, a mortal who lost his soul long ago. Caught in the middle of competing demonic families, any other human would've gotten the ax long ago. But Eddie's got a special talent that keeps him on his feet. One man's curse is another man's gift. THE DAMNED is hard-boiled noir with demons, and the team behind THE SIXTH GUN is bringing it back with new colors, a new format, and a new ongoing tale of tommy guns and hellfire.

This book is set in Prohibition times in America . Where crime organizations are controlling most of the alcohol coming in . There are rivalries and wars going on between all of them . But what people don't know there is a more sinister power is controlling the crime organizations . With greed and gluttony running rampant . Poor Eddie enters the world the only man who has lost his soul to the devil a long time ago. The only thing that is keeping him alive is his special talent .This is a dark noir book that will keep you reading .
This book is dark and so well written . You really start to care for Eddie . He is one poor tortured soul that is caught between two rival crime families . He is basically a fixer and his gift is that he can't die or can't stay dead for long . You really start to feel for him . You want to take him in your arms and hug him . You will either like him or hate him its your choice . There are also femme fatale which really isn't as fatale as you think . There are also the hangers on who really just want to be there . You will like some of them . The right hand men of the demon bosses . There are characters that you will really like and those you will hate and those that will bend your mind
The story is dark and the illustrations match the story line so well . I have seen the novel in black and white and I love it in the colour. The colour adds to the story . The story is well written and you just can't put it down . There are demons and people and they take you on a eerie rollercoaster ride . Where you will feel the pain of the humans involved and you have a love hate relationship with the demons and Eddie . So if you love eerie graphic novels with a great story line and great illustrations this is the book for you . Check it out .
Posted by BOOKS TO CURL UP WITH at 2:15 PM