Good Thursday all, hope you are having a fantastic day. Today we are reviewing
PERFECT VICTIM by Jan Christensen 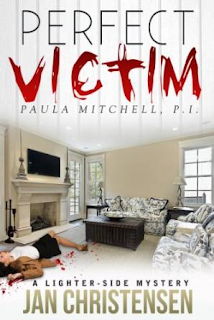 A few days after Sylvia Leominster is murdered, private investigator Paula Mitchell interviews Sylvia's fiancé in their small-town Rhode Island jail. Warren Wade's fingerprints are all over the murder weapon, he has no alibi, and Sylvia broke up with him the night she was killed. After another young woman friend of Sylvia's is bludgeoned to death, Paula is dismayed when the police keep Warren in jail. They claim the second murder could have been committed by a copy-cat and remind her Warren's fingerprints are still on the weapon that killed Sylvia.

Working with her best friend who often hires Paula to investigate cases and who is Warren’s lawyer, Paula searches for answers. Paula and her computer guru lover narrow down the suspects to the victim's friends. The group is led by a mesmeric young man with political ambitions. Paula doesn’t trust him, especially when she learns that all of Sylvia's friends have lied during her interviews. At the preliminary hearing, some answers begin to emerge. Paula zeros in on the killer and sees firsthand how friendship and loyalty can be used for personal gain. With Warren’s freedom on the line, she has to find a way to capture the real killer. But in doing so, she doesn't realize she’s putting herself and her own best friend in danger.

First in a series featuring Paula as a feisty private investigator.

MY REVIEW
Jan Christensen is fast becoming one of my favorite authors . In her new book we meet Paula Mitchell a tough as nails private investigator who is trying to solve who killed Sylvia Leominister.
She and her band of friends is trying to find out who killed Sylvia but her friends are lying and witness's are dying. They need to find a way to figure out who the killer is before Paula and her best friend end up getting hurt .
I love Paula and her best friend Geri . Paula is a tough but lovable private investigator, who is working in small town Rhode Island . She is a no nonsense kind of woman that is shy of love but will go to the ends of the earth to help a friend out. She is the kind of character that you want to read about in a book. She is strong but is human at the same time . She cares for her friends and wants to see them safe . Her friend Geri is a tough of nails attorney and is the person that Paula goes to.
Steve is a computer guru and Paula's well I guess you would say he is Paula's constant . He is a patient  man and is in love with Paula , she just needs to realize that . The supporting cast of characters are a rag tag bunch that you will giggle and laugh with. Most of them are the friends that are all in on the murder . You have to read and figure it out , I was leaning one way and then some one else popped up and I thought they did it .
Jan takes us on a fun filled ride in this book. There are strong female characters that you will want to read. I really liked this story, I loved the way the characters played well against each other . You don't figure out who the murderer is until just about the end. And when you realize it , you will slap yourself and go. Wow who knew . The author does lay out a pretty good trail of crumbs that make you go , hmmmm maybe it is him . Then you go nope it can't be him, you will get sucked into the story. I read this book in an afternoon , that is how wrapped up I got. So if you want a light hearted mystery with some great strong kick ass female leads . This is the series for you . So check it out and add it to your summer reading list . I promise you will not be disappointed
Posted by BOOKS TO CURL UP WITH at 9:30 AM