Good Tuesday all , hope your week is going well. I can't believe it is September already where did the summer go. Now onto pumpkin spice lattes and my fall reading list. Today we are going to review NIGHT WALKER  by Jacquelyn Frank 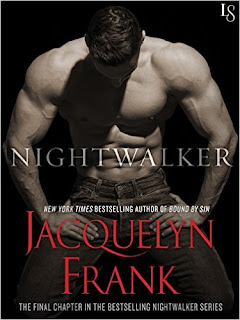 From New York Times bestselling author Jacquelyn Frank comes the final chapter in the Nightwalkers saga! As the momentous showdown with a powerful demon unfolds, a passionate encounter breaks the ultimate taboo.
Kamen is a Body walker, an ancient soul reborn in one human host after another. He’s also a prisoner of his own kind: for it was Kamen who released Apep, the deadly god who threatens the existence of their world. To atone for this grievous error, Kamen accepts an urgent mission: to convince the other nations of the Nightwalkers to set aside their centuries-old conflicts and band together. If he fails, all will be lost. And no tribe presents a greater challenge than the Wraiths, the spectral beings who are feared and despised for their lethal death touch.

Kamen makes first contact with a stunning, ghostly pale beauty named Geneviève. Part Wraith and part human, scorned as a half-breed, Viève shares the hunger for redemption—and for connection. Her scintillating touch holds the kiss of death, and yet it makes Kamen feel more alive than ever. Soon his lips are pressed against hers, sending Viève into fits of desire and forging a bond that breaches the divide between them. Now they must unite all the Nightwalkers, from Vampire and Shadow dweller to Djynns, and fast—for Apep is ready for war.

MY REVIEW
When I started this book I realized that I had jumped into the series at the tail end . So I went and read the first books in the series to get a better understanding of what was going on. The story had all the characters from the other novels , so it felt like you could follow very easily . The story is Kamen's and Genevieve's story . Kamen is a body walker and also a prisoner , because he let Apep go
He is full of guilt of what he did . He is atoning for his sin by taking on the mission of uniting all the night walkers . When he meets Genevieve a half wraith half human . Who has been shunned and ridiculed as being a half breed . They have a chemistry that can not be denied when he kisses her they can't deny what they feel for each other But now they have to survive to unite the night walker and defeat Apep.
The author has created some great characters . Kamen and Genevieve are such complex characters
Kamen is such a strong character who was the bad guy from all the other books. He is badass and I wouldn't call him evil , I would say that he was misled into doing evil things. From what I read in the first books . I hated him very much but as I read this book Kamen started to grow on me . He went from evil to a warrior.  I actually started to like him as I read , he totally redeemed himself. Genevieve is a very strong female , she has been shunned by everyone . She is half wraith and half human . Thank god that her human side is the dominant side. She is attracted to Kamen and when they get together sparks fly , They are strong but also broken and together they help an heal each other. All the other characters are in this boo also and they add to the story line very nicely.
The author takes us on quite an adventure in this story. There are twists and turns and you will be cheering before the end of the book. I strongly suggest that you read the other books in the series before you read this one , so you can keep everyone straight in your mind . Its nice to have the back story of all the characters as you read this story. So you won't get confused like I was at the beginning . This is a great series by a great author that I am glad I discovered .  It is well written and I was sucked in I read well into the night .