Good Monday all I hope your Christmas prep is going great and you are still finding time to read your favorite books . Today we are going to review Aster by Freya Lecrow. 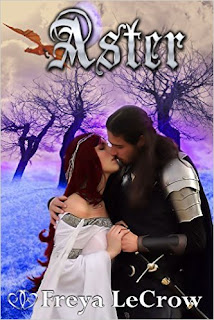 The unthinkable happened to the human race—earth broke apart and blew up. The remaining survivors loaded on a ship in search of a new home. They finally found a planet that would sustain life. What they didn’t count on that it already did for creatures who had previously only lived in stories.

When the new world welcomed the humans, the humans soon found not all was what it had been—at least not for a choice few. The strange new world had prepared for their return long before the day the ship landed.

Will the planet they called Aster serve as a new home? Or will it turn into a nightmare for the chosen few?

MY REVIEW
Welcome to the Freelance , the vessel holding the last of the human race as the world breaks up an falls apart . They were starting to give up hope when they found a planet that would hold them . When they land they find animals that are only found in fairy tales . Only to find out that there is more to this planet and the animals and creatures that live there . Its like the planet was waiting for them. Will the planet accept them and will they survive the planet.
The characters in the book are vast and plenty. We have humans, witches, vampires.  dragons and fairies. They all have important roles to play, Nimigona was driven away from the planet and is back to find out why . As you read the characters will take you on a ride that you don't want to stop. You will meet some cool creatures that live and tell the story . The planet is a character also . It comes alive within the pages and take on a life of its own .
Over all I really loved reading Aster . I was taken on a magical journey to another planet . Which hold all my favorite fairy tale creatures . The author made them come alive for me , which I love . The story read well and the flow was nice but it took me a few pages to get really into the story . After I did the pages just flew by . You will laugh and cry in some areas and maybe throw your kindle at a few points. So if you want a book that will take you away this Christmas season check out Aster .
Posted by BOOKS TO CURL UP WITH at 9:22 AM