HAPPY CHRISTMAS EVE , EVE. Hope you are all ready for the day . If you are looking for a boxed set for that last minute gift. Check out ENCHANTED HIGHLANDS  by April Holthaus , Dawn Marie Hamilton and Victoria Zak 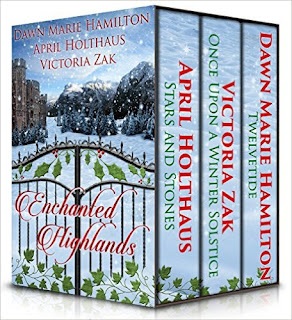 Fulfilling a childhood promise, Ashley Dumont returns to an ancient Druid garden in the Black Hills of Scotland on the eve of the winter solstice—a time when magic hums and the veil between realms thins and tears, allowing all manner of supernatural creatures through. Will the ghost who claimed to be her destiny still be there?

Caelan Innes awaits her arrival. Unjustly murdered in the sixteenth century, a second chance at life depends on this woman. The Druids grant them the twelve nights of Yule to find love and save Cael’s soul. Will a trip through time and the treachery of enemies make the sacrifice too dear?

Stars and Stones
By April Holthaus

Riley Kincaid was a man who thought he had everything, until fate intervened. While traveling to London; only days before Christmas, a fierce storm blew in forcing Riley to land in Scotland instead. With treacherous winds and snow-covered roads, Riley found refuge at a small bed and breakfast as he waited out the storm. But little did he know that his arrival was not by mere chance.

Once upon a Winter Solstice
By Victoria Zak

What if all moments throughout time existed at once? What if you had a love that stood the test of time? Never faltering, never fading. What if one legend brought both time and love together as one? Once Upon a Winter Solstice is dedicated to those who believe in true love.

MY REVIEW
First of I must say this was an awesome Christmas read. Each author took us on a journey to find that true love that we all want and need. All three books are entwined with the story of Holly and Ivy an the magically garden that will bring your true love to you.

In TWELVETIDE by Dawn Marie Hamilton
We meet Ashley and Caelen, who have met in the magical garden when she was 7. Now she is back to fulfill the destiny that awaits both of them.  The characters are so well written and complex. Caelen is so the highlander , strong, sexy and a has a heart of gold . Even though he has been blackmailed by his clan . He is still honourable. Ashley is a tough as nails woman . She has been through a lot and when she comes back to fulfill her destiny . We see her go head on into it . Fighting for her man .  I so loved this story , I laughed and I cried while reading this story.

In STARS AND STONES by April Holthaus
Tells us the story we meet Ryley Kincaid and Rose .  This story takes us on a journey of love and sacrifice. The ultimate fairy tale of the hero and his damsel. Ryley's journey to save his precious Rose. Will survive and be with each other. This story reads like a fairy tale, which is full of twists an turns . There is magic , romance and highland myths and lore . The characters are complex and lovable. You will be cheering for this couple.

In ONCE UPON A WINTER SOLSTICE by Victoria Zak
In this story we meet Ivy and Killen. Ivy has been told stories since she was small about the myths and the legends of the Scottish highlands . Killen Maclochlan . When he finds Ivy in his loft , they have feelings that they have known each other . Will they remember the story of Holly and Ivy and will the love they have survive.
I absolutely loved this story, the characters are so complex . You just want to take them and wrap them up and hold them tight . The story will have you on the edge of your seat as you read . You will want them to be together as they work their way through the times . You will cheer and shed a tear for them . You will fall in love over and over .

Over all,  all three stories are well written and full of love. The characters are diverse but all have the same theme entwined with in them.  This would be a wonderful box set to give to that one person that is a romantic at heart. I read this book in one evening , and fell in love with each and every character. This will be a great set to read during those long cold nights . Grab a glass of wine and a nice cozy blanket and find a nice place to curl up . Let the highlands of Scotland take you away  I promise you will not be disappointed