IS ANYONE READY FOR A LITTLE HELLSPAWN

Happy Wednesday all , I was so excited to see the second book in this series . I absolutely fell in love with Ricky Fleet's debut novel HELL SPAWN . Well I read his second book HELL SPAWN ODYSSEY in one evening . It was that good . 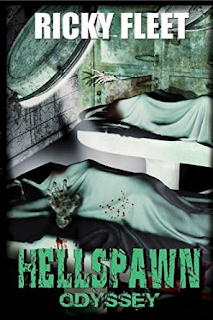 Kurt Taylor and his family have battled the living and the dead and now find themselves on the run, their home reduced to ashes. With unimaginable horror lying in wait around every corner, the onset of winter and the plunging temperatures only add more danger to their precarious existence. They decide to forge ahead and try to reach the protection of others who have hopefully survived the zombie apocalypse. If this fails, their only choice would be to try and reach an impregnable fortress, a sanctuary that has stood for a thousand years.
Standing between them and salvation are the villages and cities of the damned, a path that will test their spirit and resilience unlike anything they have faced before. More companions are rescued from the jaws of death and join them in their perilous journey. Mysterious attacks befall the group and it becomes clear the dead aren’t the only things that lurk in the darkness.
Tempers fray and personalities clash. The group starts to fracture and Kurt is forced to commit acts that cause him to question his own morality. Can they survive the horror of their new existence? Will they want to?
The Hellspawn saga continues.

MY REVIEW
This book picks up where the last book left off . Kurt and the gang are trying to make their way to safety. They are leaving their house and everything they knew . They are still fighting the zombies and pick up a couple more survivors on the way . As the journey continues they run into other survivors and mysterious attackers . Will they survive the apocalypse , the attackers and will they survive each other .
This story took off with a bang and kept on going till the end.  Kurt and the gang are put through the ringer in this book. Between trying to stay one step ahead of the zombie horde that is coming and trying to keep everyone from loosing it. You can see them struggling big time . The gang is still together and they pick up a few more characters along the way. Some of them you will love and then there are some that you really want to punch in throat repeatedly because of the selfishness that this character has . I must say the author has packed this book full of emotion and suspense.  Ricky puts his characters through the ringer in this book .  You feel the emotions flowing off the pages and be on the edge of your seat the whole way through the book. I was flipping pages like there was no tomorrow trying to figure out who was chasing them and if a certain character gets it in the end .
The characters in this book are so well developed and complex , you will either like them or hate them . Kurt is taking on a more darker roll this time around , he is really trying to get his family to safety but things just keep getting in the way and make him rethink what he has done and has to do to survive . He needs to keep his family safe but at what cost to him and his soul. He changes through out the book.  The rest of the group are also becoming a bit darker and more into the need to survive mode . They are not taking anyone or anything for granted anymore , not even the military . We also have a few new characters that come aboard this time around . Debbie and Peter are the first new characters we meet . Peter is for the lack of a better word a wimp when we first meet him . He is scared of his fiancé. As you read into the story we see Peter grow stronger as he gets closer and closer to Kurt and the gang . Paige seems to bring out the best in him. As for his fiancé Debbie she is an evil .evil woman. She is a whiner and a spoiled brat that doesn't want any help from anyone . She just wants to make trouble for everyone . Trust me I so wanted to punch her in the throat repeatedly, I so disliked her from the first moment I met her. I will say that is great writing when you instantly dislike a character so much and there is no way of making her good . She makes trouble for everyone, trust me on this you will dislike her .
This book will keep you on the edge of your seat the whole way through, the author takes us on a journey with so many twists and turns . You will not know what hit you from page to page. The author has his own way of writing that is unique to the way he tells a story. For being his second novel he has placed the bar high . I love his unique twist on the zombie story and so can't wait to read the next book in the series . I know I will not be disappointed in the least. So if you want a great story with great characters both good and evil . This is the book series for you , so check out HELL SPAWN series by Ricky Fleet.
Posted by BOOKS TO CURL UP WITH at 11:35 AM