Good Monday all , hope you are ready for a fabulous week ahead . Today we are going to review SINS OF THE HEART  by Eve Silver . 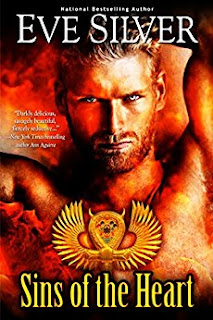 Library Journal raves the Sins Series is "...dark, seductive, and sexy as sin." For readers who love paranormal romance and urban fantasy.

Dagan Krayl, the Underworld's most powerful soul reaper, is the demigod son of the evil god Sutekh. He's on a mission to find his murdered brother's remains and resurrect him, but resurrection means that the secrets carried into death would be released and, with them, a war that could end gods and mankind alike.

Roxy Tam is searching for the same thing, but for completely different reasons. She means to make certain that the remains don’t fall into Sutekh’s hands, and that the soul reapers do not reanimate their fallen comrade. As a Daughter of Aset, Roxy is tasked with the protection of the human race, and if that means thwarting an all powerful soul reaper and making certain his dead brother stays dead, so be it. But when Roxy sees Dagan face-to-face, she realizes that she has met him once before—a meeting that changed her life forever.

Neither Dagan nor Roxy expects to join forces for the sake of mankind. Or to have their loyalties tested as they struggle against treachery, betrayal and the potent desire that threatens to consume them both.

This is the first book I have read by this author, I will say that it was an enjoyable book but had a slow start . It felt like it took a long time for the story to really get going . But once it got going it was a really good read .  Let me introduce you to Roxy and Dagan .
Lets head into the Soul Reaper realm , Dagan an underworld soul reaper a very strong soul reaper .  He is on a quest to find his murdered brothers bones to bring him back to life . Roxy is on the same mission but for a different reason . She is out to stop Dagan from bringing his brother back to life . When they meet there is a spark and memories that they have met before . But will they survive against all that is thrown in front of them All the treachery. betrayal and the desire that is burning between them  to finish the quest .
The characters are well developed and well written . Dagan is oh so hot and sexy as he is dark and frightening. I wouldn't know what to do if I was in the same room with him, either throw him on the bed or run for my life . Roxy is one tough cookie, she is ass kicking woman who is also battling her own demons. She is tough to the very bone of her being and is true to herself . When they are together you can just feel the heat coming off of them and you want them to get together in some way or any way .
The book takes you on such an adventure ride . I did have a little bit of an issue on how long it took them to reconnect , it just seemed so very slow at the beginning . But don't give up on it when they finally reconnect the book just takes off and you are in for one helluva ride . Over all the book was really good and once I got into it I couldn't put it down .  I will be checking out other books by the author . This would be a good book for a rainy day of reading . Check it out