Good Tuesday all and wow its August 1st the summer is half over . Today we have a new release BLOOD ENFORCER by Jessica Aspen 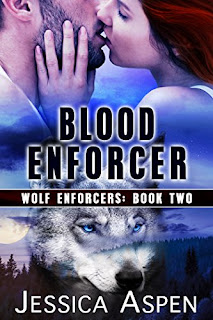 Glenna McReynolds justwants to go home, but her captors say she's one of them now...
and she can never gohome again.

It was just another ordinary day for Glenna...until she was violently attacked and ended up in the hospital. Now, Glenna is on a whirlwind discovery of the world ofwolves, dreamwalkers, and spelltalkers--a world she never knew existed. Andshe's hell-bent on escape.

After nearly going wild wolf, Sam Wulfric is back and sane--mostly. The last assignment he wants is babysitting a new wolf shifter and all the chaos that involves. Even worse, she's one of the sexiest women he's ever seen and she's driving his wolf crazy. But when everyone from the US Government to an unknown assailant comes after Glenna, Sam's instincts take over. Now, he'll do anything to keep Glenna safe--even if her new found mating urge drives him over the edge.
Dare to enter JessicaAspen's world of romantic shifter suspense
and discover your imagination.

This is the second book in the WOLF ENFORCERS series and all I can say if you thought the first book was good this one will knock your socks off .  This is Sam's book and I was so excited to know that he was getting his book . His story was such an intense book . If you remember right Sam almost went wild in book one after the woman he wanted as his own mated with his brother . Now he is back and well mostly healed from what happened but its there on the edge . Now he is being driven wild but in a different way . Enter Glenna a newly bitten wolf that needs his protection and most of all she needs him . Will they survive all the people after them and will they survive the mating heat that is consuming them .
Blood Enforcer is a sitting on the edge of your seat fun. The characters are well developed and complex . Especially Sam , he has been put through the ringer and you can see him fighting his own demons as he starts to open himself up to what Glenna can offer him . One min you want to hug Sam and tell him everything will be ok and the next min you want to slap him upside the head cause he is frustrating you to no end . He is so self destructive sometimes . But I will say ladies  he does redeem himself and becomes the one alpha man that we all love and swoon over, I instantly loved Sam
Glenna on the other hand it took me just a little bit to get to like her . She just seemed so ummm how can I put this well lets say whipped . When she was with Sam  at the beginning she was being so self conscience about even eating . I know she was traumatized her whole life but I kind of wanted to just slap her, but she grew on me as I read . She became a very strong woman and I really started liking her . Then I wanted to slap her again when she was well lets just saw she was being a flirt not going to go into more details but you would want to slap her too :)  The she went back to me loving her and that is all that counts . That is the sign of a great character when she evokes that much reaction from me .
This author is always a one click for me . I have fallen in love with all her characters and she takes us on such great adventures .  I read this book in an evening . I just couldn't put it down . The stories are such a great read . There is always great romance and there is always intrigue and mystery to go along with it. You will get sucked into the story and you won't want it to end . They will steal your heart and you will love every second of it . So if you want a great read check out the Wold Enforcer series . Add them to your summer reading list . YOU WILL NOT BE DISAPPOINTED