Good morning all hope everyone is having a great day so far . Today we are going to review
SCORING OFF THE FIELD (WAGS ) book 2 by Naima Simone 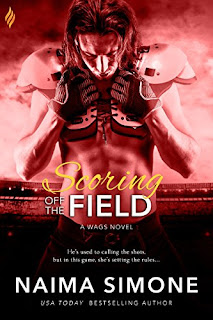 Tennyson Clark is getting a life. First step: quitting her job as assistant to Dominic Anderson, star quarterback for the Washington Warriors, her best friend…and the man she’s been secretly in love with for years. But since the gorgeous, if overprotective playboy has only ever seen her as his BFF, she’s finally ready to relinquish her tattered fantasy and move on. Enter steps two and three: new job and new man.
Football is Dominic's life, and with his contract soon up for renewal, all his focus needs to be on the game. But Tennyson—dependable, logical Tennyson—is making that next to impossible with her mysterious new job and her sudden interest in online dating. He doesn’t do relationships. But the thought of another man touching her sexier-than-hell curves has him suddenly wanting more from his best friend.
Indulging in hot, dirty, what’s-my-name sex with no strings and lots of benefits is simple, uncomplicated…until it’s not.
Each book in the WAGS series is STANDALONE:* Scoring with the Wrong Twin* Scoring Off the Field

MY REVIEW
The dreaded friend zone is where Tennyson finds herself with her boss and best friend . Dominic Anderson . She decides that she needs a new job and a new man . Because Dom doesn't do relationships and Tennyson is in love with him . But enough is enough she is tired of being in the friend zone .Its like Dom doesn't even know she is there . But with her new mysterious job and her on line dating habits . Has Dom in a tither and he is now thinking he wants more . But will they end up together or will things get in the way .
This is the second book in the series and man the author has written such sweet complex characters . I really like Tennyson . She is funny as all get go but she is also a romantic with a heart of gold . She has been best friends with Dominic since they met at the foster home . You can really feel her love for him as you read the story. You really see her come into her own by the time you are done reading . She really is a great character
Now Dominic he is hot sexy as sin and so dense sometimes . You don't know if you want to slap him up side the head or climb him like a spider monkey.  He seems like he could be a great boyfriend if he pulled his head out of his butt and realize it . But he does grow through out the book and when he finally realizes it is Tennyson he changes and realizes that life can be great with your best friend .
This is the second book in the series but can be read as a stand alone . The characters are great and the story line is hot, hot, hot . There are some hilarious scenes like a drunken Tenny and the aftermath when Dom is harassing her . There are tender scenes . The action takes us on a journey of best friends finding love exactly where it should be between them all along . So if you want a hot sexy series with hot alpha football players and the women they love check it out