Happy Friday eve all and happy almost Easter . Today I have a great book you can read over the Easter Weekend . WICKED DARKNESS ( Daughters of Highland Darkness book 3 ) by Victoria Zak 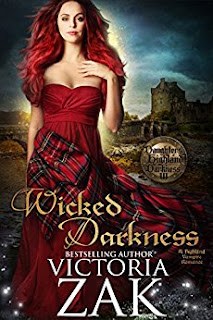 A sister's ultimate sacrifice…Leana blames herself for destroying her sisters' lives and for the death of their beloved mother. But one night, Leana finds a way to save her sisters. She disguises herself as a mortal woman, hiding from the world of magic and her greatest enemy, Queen Snowdrop, the queen of the Unseelies.A warrior's troubled soul…Kendrick is a broken man, dependent on ale to make the sorrow left behind by the loss of his wife bearable. He's vowed to never love again until his friend convinces Kendrick to hire a housemaid from the local tavern to take care of his home and children. Can he resist the desire the beautiful redheaded tavern maid has awakened?Two broken hearts become whole…Leana's heart is cold as ice, at least that's what she believes. Until Kendrick resurrects the passion Leana thought was long gone. What is it about the battered warrior that stirs her feelings? Will one kiss spark hope between Kendrick and Leana, or will they surrender to fear, denying their love, the very thing that could save the people they treasure most?

MY REVIEW
This is the final book in the series and the one book I have been waiting for . I really wanted to read Leana's story. Leana has been running for so long . She has guilt that she thinks she has destroyed her sisters lives with what has happened and the death of her mother. Until the day she finds a way to hide from the magic around her and keep her hidden from Queen Snowdrop. She hides out as a human woman. Everything was going well until the day Kendrick walked into the pub where Leana was working . He stirs up feeling in her that can not be denied . But when he brings her home to be housemaid to his children . Desires are ignited and passion fires are lit . Will their love help Leana and Kendrick and save the people they both love . Or will the denial hurt them all
This is such a great way to end the series , the characters are so carefully crafted and so well written . Leana is such a complex woman . She is carrying so much guilt at the start of the book . She is also very desperate and wanting to hide. She just wants to hide from everything . But as you read you see her grow into a very strong woman and does what needs to be done even give up on true love to save her family . I think out of all the sisters she is my favourite . She is so much more complex and you will fall in love with her . You will also want to shake her a few times through out the book also . Kendrick on the other hand you want to dump his head in a water trough a few times . He is gruff and also so broken . He is still trying to come to terms with the death of his beloved wife and doesn't really treat the children well. When he meets Leana and brings her home . We start to see him change and come back to life . He grows and becomes lovable . Just like all the authors male characters . He is tortured and you just want to hug him and make him feel better .
Leana's sisters are back helping her out . They come with their mates and rally around the two lovers and help them realize that their love is strong that will help heal them .
The author takes us on one last adventure full of love and intrigue .  There is a big battle and you will cheer and also shed a tear or two .  I am glad the author took us on the journey and happy that the story ended up the way it did . Great story and trust me you will fall in love with the characters . You need to read the books in order but I strongly say read them all . You will not be disappointed