Good Thursday all , today we are going to review the first book in the AWAKEN Series by Mathew S Cox . PROPHET OF THE BADLANDS is up 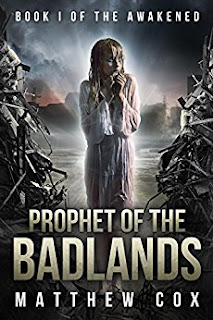 For most twelve year olds, being kidnapped is terrifying. For Althea, it’s just Tuesday.Her power to heal the wounded and cleanse the sick makes her a hunted commodity in the Badlands, a place devoid of technology where the strong write the law in blood. For as long as she can remember, they always come, they always take her, and she lets them. Passed around in an endless series of abductions, she obeys without question―mending those who killed to own her.After three whole months in the same village, the affection of a young warrior makes her feel almost like a member of the tribe rather than a captive. Her brief joy shatters when raiders seize her yet again; for the first time in six years, being stolen hurts.A reluctant escape sends her wandering, and she realizes her gift is a prize that causes as much death as it prevents. Her attempt to return to the tribe leaves her lost and alone, hounded at every turn. When a family who sees her not as the Prophet―but as a little girl―takes her in, she finds the courage to use her power to protect those she loves.A strange man from a world beyond her imagining tests her newfound resolve, seeking to use her power to further his own agenda. Tired of being property, her freedom boils down to one question:Can Althea balance the sanctity with which she holds all life against the miserable truth that some people deserve to die?

I am glad I took a chance on this book . I love post apocalyptic tales . This dystopian tale is one of a poor girl who is a seer and a healer .She has been captured and stolen so many times she doesn't know where she belongs . The tribes wanting to keep her captive because of her healing abilities . After being with a tribe for awhile she was starting to feel safe but then she is stolen again . Which sets her on a path that will take her to a place where someone wants to use her for his own gain . But this time she is ready to fight and get back to her family .
The main character Althea is such a sweet character , she is only 12 but she has been through so much . She can heal the sick and is so sought after by everyone . You feel so sad for her at the beginning of the book . She is just a waif that is scared of everything and everyone . But as she is stolen by each tribe , you see her start to grow and get so motivated. Some ways she is still  a child but as you see her . You see her start to grow and become the strong young woman . Each character that helps her or steals her adds to her growth. Karina is such a force for Althea they become like sisters . They form such a strong bond that can't be broken . Pixie and the rest are such a random group of awaken who only want to use Althea . This is where she starts to stand up for herself .  These characters are  very well written and complex . You will want to wrap each character up and tell them that everything will be ok
The author really does know how to write an apocalyptic dystopian story. He takes us on a roller coaster ride . Bringing out all our emotions in the process. You really feel for the main character  and want to see her safe . There are so many twists and turns in this book that will keep you reading well into the night . There is so much packed into the pages of this book . You will be blown away with all that goes on . I couldn't put this book down and finished it in a day and a bit . Its that good . So if you want a great story that will make you feel and laugh check it out