Good Monday all and happy MEMORIAL day to those in the U.S.A . Today we have a book that should be on your summer reading list . A friend of mine told me about this book and seeing as I am going through an OUTLANDER withdrawal . This book hit the spot . AWAKEN MY LOVE by Robin Schone 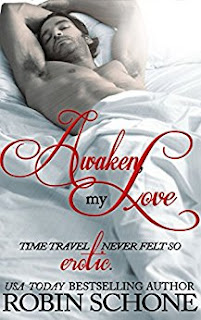 MY REVIEW
This is the first book I have read by this author and I must say I was blown away . The author takes us on a very erotic trip back to the 19th century . Where she wakes up in another woman's body to a English baron, who by the way is built for sin and wants to wake up the sexual desire in his young wife . Elaine/ Morrigan is torn between her 20th century ideals and the ideals of those of ladies in the 19th century. Will Charles win out or will Elaine have to give up her place when the woman she traded bodies with want her body back .
This story had me hooked from the very first page . The characters are well written and complex . Elaine/ Morrigan is such a fun character . Elaine is transported back to the 19th century and is totally confused on what is happening . She was hilarious as she is trying to figure out what the heck is going on . She honestly thinks that she is going crazy and is thinking that she should be locked away . When she is finally figuring things out she grows and starts to let go of Elaine 20th century and starts becoming the lady of the house .  She is such a hoot to read, you will love her trust me . Charles well what can we say about him . He is built for sin let me tell you . He has read the karma sutra and knows the way of tantric sex . He would be any woman's fantasy . He is also a frustrated man , we can see his frustration though out the book . He wants his bride and wants to love her with all his heart . We see him tease and love his bride Elaine / Morrigan . He also stands up for her through out the book especially when her family shows up and starts to belittle and put her down . Elaine starts to stand up to these people and man she grows leaps and bounds when she does that.  You will absolutely hate her family , they remind me of social climbing piranha . They are arrogant and honestly during the dining scenes they remind me of pigs at a trough .  You will oh so laugh at these people . Her uncle is just creepy and he is hiding so much .
This story had me hooked from the beginning . The author takes us on such a fun journey . We see so many transformations through out the book . The author doesn't sugar coat what life is like in the 1800s . I mean it sounds like torture corsets alone would drive me crazy but the chamber pots yeah no.  Just imagine what you would do for your time of the month without protection yeah I can't either . The author has Elaine fumble through it with humor .  I will warn you there is a twist at the end of the book that had me wow that's how it happened . She totally turned the story on its side . If there is only one thing the ending I wish had more of a punch and declarations of love between them . Don't get me wrong the ending was awesome was hoping for a little bit more fireworks .  This won't be the last book I read from this author . So if you want an epic read for your summer reading list this is the book for you
Posted by BOOKS TO CURL UP WITH at 8:03 AM