Good Wednesday all , I hope you are all having a great hump day . Today we are going to review one of my favourite authors . KNIGHTS OF THE SWORDS( knights of the tarot book 4) by Nina Mason . 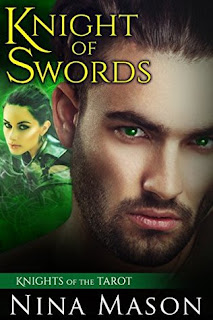 Finn MacKnight, a womanizing bartender in New Orleans, has no clue how the blood-red moon that appears in the sky one night (while he’s having yet another meaningless sexual encounter) is about to change his life in unbelievable ways. Then, the creepy-yet-caring uncle who adopted him as a baby, reveals the astonishing truth: Finn is a faery—an Avalonian drone, to be precise—and is to lead a rebellion in another world—against the wicked faery sorceress Morgan Le Fay.
In the thrilling adventure that follows, Finn meets Wella Lyon, who teaches him the ways of the ancient Celtic warriors, how to call forth his inner wolf, and the true meaning of love and intimacy.
But will the lessons Finn learns from Wella, the Druids of Brocaliande, and the knights from the previous books in this magical series prepare him to lead a coup d’état against Queen Morgan and her army of vampires? Only time...and an ancient prophecy...will tell.

MY REVIEW
This is the last book in the Knight of the Tarot series and I will say I think it is the best of the series . Finn MacKnight is a womanizer. He lives in the town of sin New Orleans and has no idea what he actually is and what the red moon means, shining outside his bedroom one night . Until his uncle sits him down and tells him that he is the one of a prophecy , that he is actually fairy and needs to lead the rebellion  against Morgan Le Fay. With the help of Wella Lyon who is a celtic warrior and his mate . Will they survive the rebellion and will they find the love that is inside of them . Will Finn be able to fulfill the ancient prophecy .
This book is very character driven . The characters are well written and very complex . Finn is such a playboy at the beginning of the book , he is a cad and will take almost anyone home for a night of fun time in bed .  Until the day he finds out what his destiny is  you see him start to grow up and take his new role seriously . He also finds out who the woman is that will complete him. He takes the mantle of leader seriously and you see him triumph and fail but he always comes back fighting harder . For everyone that has helped him and for the woman he loves .  Wella is a kick butt woman , she is a warrior and a sweet woman. She tries to hide the attraction to Finn cause she wants him to fulfill his destiny , When they are together they are a great couple that bring out the best in each other . I truly love these two at the beginning I kind of wanted to slap both of them upside the head a few times but they won me over in the second half of the book . I fell for Finn when he became the warrior that they needed . Wella grew on me as she became a warrior in her own right .
The author takes us on a emotional roller coaster ride .  There are lots of twists and turns in this book that will have you on the edge of your seat the whole time. I have read all the knights of tarot books and I must say the author did the ending right . I think that this is the best book out of the series . There are a few moments where you want to kill the main characters but they do redeem themselves over and over again. I am kind of sad that there might not be anymore books in this series , I truly enjoyed each and every story. So if you want a good series about Fairies and Avalon theses are the books for you . There are hot sexy knights and the ladies that love them .