Good Saturday all . WOOHOOOOO its long weekend up here in Canada . I will be reading all weekend . Today I am going to review DREAMSHORES by Mike Robinson 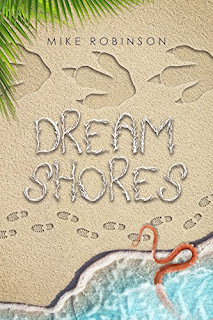 Restless and fire-hearted, ten-year-old Sierra Nevada Smith was always chasing monsters, whether through the pages of her favorite books or in the woods behind the secluded California town where she grew up. Fantastic new worlds opened for her, however, when, after a near-tragedy, she discovered the films of legendary stop-motion animator Russell Boylan.Ten years later, she finds herself working aboard a yacht, adrift at sea and in life, her peers nicknaming her the ‘Monster Girl’: a sad consolation for her own stunted career as a stop-motion animator in this era of computer-generated effects. When their boat is mysteriously pulled through a corridor of fog, the crew finds themselves deposited on the shores of an extraordinary island, a place where the stomping, roaring, clambering dinosaurs and creatures of Russell Boylan’s classic films have been relegated to live beyond script or screen, and to evolve.And it is here that Sierra discovers not only an incredible power, but what may be her purpose.

This is a strange story in a very good way . The story starts with a ten year old Sierra a girl who chases monsters either in books or in the movies of her all time favourite film maker Russel Boylen . A stop motion animator . Jump ahead ten years and Sierra is all grown up and working on a yacht and nicknamed the monster girl by all her friends and work mates . When they end up on an island where all Russel's monsters are alive and evolving . She finds out her purpose in life and what she is meant to do .
This is a book that has a vibe of all old time horror movies . The characters are well written . Sierra is a young woman that is obsessed with all things monster related .  She knows everything about the monsters of Russel Boylen.  She is a spitfire and she thinks she can do what ever she wants .  She is loyal to her friends especially KB. Now KB is a sweet guy that would do anything for Sierra . He tries to protect her and they have such a special bond . They are great together as friends . Now the real star of the show is the island . It is ever changing and evolving keeping everyone including Sierra on their toes .
This book is like a combination of land of the lost and every monster movie you have seen . The author takes us on an adventure full of monsters and a brave girl that will stop them . It read like a graphic novel you can just imagine what is going on and painting a picture as you go along . There was just a few spots that I was tripping over when it got just a little too technical in the wording . Another spot was the ending I would love to have seen how they survived after the island . It just kind of stopped with them on the island . Over all I really enjoyed this story and the premise was very intriguing . I could really see this one as a graphic novel . So if you want to take a chance on monsters and islands in the middle of nowhere check it out you will not be disappointed .
Posted by BOOKS TO CURL UP WITH at 6:56 AM