Good Saturday morning all , today I have a new book by Robyn Peterman. TALLULAHS TEMPTATIONS (Sea Shenanigans book one ) 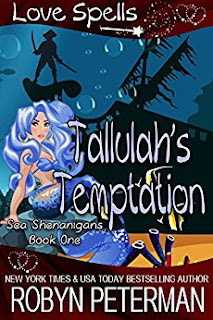 Pirate DougWhat in the Chicken of the Sea was I thinking to agree to this half arsed Otherworld Defense Agency mission?I’m the most absurdly good looking Vampire Pirate of the High Seas. Being on the run for my life is very important work… and a freaking full time job. Defending Mermaids from some vicious Sea Hags is going to cut into my pilfering time.Unacceptable.Even though this is a very bad move on my part, I know I’ll eventually agree—too many bounties on my arse to refuse, and the thought of a certain Mermaid makes my roger quite jolly.However, Tallulah, the leader of the Mystical Isle Pod of Mermaids, isn’t going to be happy to see me… at all. The horrible, sexy, breathtaking woman has been starring in my dreams for too many years to count. Sadly, just when my mind wanders to the really good nookie part, the dream ends with her lopping my Johnson off.I just hope to Hell and back that the Sea Hags have some outstanding booty to steal. If I’m going to have to regrow my tallywhacker, the treasure had better damned well be worth it.Tallulah Running a tourist trap for humans in the Bermuda Triangle had sounded like a fine plan—until it wasn’t. With the Sea Hags gunning for our island and ruining our questionably successful business, I did what any desperate Mermaid would do. I called for backup.Of course, getting help from the Otherworld Defense Agency is risky as they don’t usually deal with ocean creatures. Whatever. Desperate times call for crappy measures. Chances are they’ll send freaking Pirates. I hate Pirates…Well, I hate one Pirate in particular.Hopefully, it won’t be the one seafaring jackhole I despise more than any other. Pirate Doug would be an idiot to show his face here after what he’d done. Not only did the dumbass abscond with our treasure, the son-of-a-bitch took my heart with him as well.I’ll tear his sorry ass to shreds if he so much as steps even one hairy toe on my island.

Welcome to the middle of the Bermuda island and the Mystical island pod of mermaids . Tallulah and her mermaid sisters are trying to stop a sea hag invasion . When she sends out an sos to the OTHER WORLD DEFENSE AGENCY for help . And who do they send but the randiest pirate out there and Tallulah's ex .  Will they survive the sea hags and will they actually survive each other .
This is a funny new series that I fell in love with . I have never laughed so hard in my life . Pirate Doug is hilarious  a vampire pirate , he is foul mouthed and always has sex on his mind .  He is so fun to read , you just either want to sex him up or slap him upside the head with some of the stuff that he comes up with .  Tallulah well she is one fierce mermaid . She is a fighter and is sexy as any mermaid is . When they are together , funny ensues . They know they belong together but they have a fun way of getting there . Poseidon  makes an appearance in the book . Man he is one drunk fool who loves to mess with his children . I think my favourite character in the book is Polly the offensive parrot . She is more then what she seems . The way she harasses poor Doug is hilarious . She is a poop machine and always aims for Doug in some way . She was a hoot .
This is a laugh out loud book . The author takes us on a fun filled ride . Her characters are well written and you will fall in love with them . I am pretty sure that Pirate Doug is the cousin of Pirate Dave one of the authors other book . I laughed so hard through out the book I actually snorted a few times .  These books will be an automatic one click . So if you want to add a funny sexy read this summer . Add this book to your summer reading list . You will not be disappointed .
Posted by BOOKS TO CURL UP WITH at 7:56 AM