Good Tuesday all today we have another great release day . A brand new series by Andy Peloquin and his first book in the Heirs of Destiny series . Lets check out  TRIAL OF STONE . 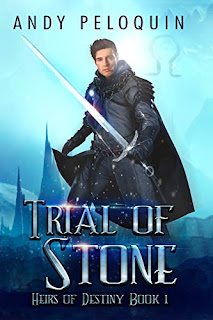 A kingdom of death. A war for power and profit. Young heroes caught in the crossfire.

Kodyn expected hardships along his journey to return a kidnapped girl to her father.  Yet harsh deserts and cutthroat bandits prove far less lethal than the foes that await him in Shalandra, the City of the Dead.
In the shadows of golden spires carved from mountain stone, currents of corruption and vice run deep. Priests of the god of death rule with an iron fist, imposing a rigid caste system that elevates some to a life of privilege and condemns others to miserable squalor.
Together with Aisha, a fierce warrior from the north with the mystical ability to speak to the dead, Kodyn must survive the cesspool of high society deceit and betrayal.
Polite smiles hide sharp knives. Killers, criminals, and bloodthirsty cultists lurk around every corner. Can these youths overcome impossible odds to save the realm?
MY REVIEW
What do you do when you are the son of the best thief in the night guild and want to come out from under her shadow. You along with your best friend decide to help a young woman get back to her father . Koydn along with his best friend Aisha help bring Briana home to Shalandra, the city of the Dead . Where things aren't what they seem . Corruption runs the city and there is a class divide where the wealthy are cruel and the lower caste are living in squalor . They are thrown into the middle of what seems to be a war between the castes . With the help of his best friend Aisha and her warrior fierceness they will jump into the middle of a war that they might not be able to win .
This is an epic book with so many characters but the main characters are so very well written and complex . Koydn is a strong young man who is trying to find himself . Sometimes he is a hotheaded young man who wants to do every thing for himself and keep everyone safe . You will love him and want him to do well and keep everyone safe . He is young and wants to get out of his mothers shadow and become his own man. His best friend Aisha is a fierce warrior , she will kick your butt and hand it to you in about three moves . She has been through a lot and has come through the other side . Taken in by the Night Guild , she grew up training to be the best at what she does . You will love her so much , I will say she is my favourite character through out the series . She is strong and also can talk with the dead which we find out all about in this book .  We also meet some new characters Briana is the young woman that Koydn and Aisha help make it home . To me she is a character that you will have to get use to . One moment she is strong and the next she is like a little scared kitten . It took me a bit to get use to her ,but she did grow on me . We also meet Evren and Hailen from the Dark blade series . They are on their way to Shalandra for their own quest .  Also we will meet Issa a young Shalandraite who will blow your mind not going to say any more about her cause you have to read the book to find out more about all the characters .
This is a big book and once you start reading you will not and can not put it down . The story will take you on an epic journey into a world of fantasy .  The author takes us on such a roller coaster ride , there are twists and turns that will keep the pages turning way into the night . When is started this book it was like coming home to a cast of characters that you want to know and take care of .  The author builds a world that will amaze you . The caste system he has set up takes you from the poorest of the poor to the richest and shows the difference of what money and power can do .  When you start this book be prepared not to move for most of the day, have a warm blanket and a good cup of tea cause you will not put this book down until you are finished . The story will have you entertained and you will fall in love with the characters . It is the best of both series . So if you liked the Darkblade series and the night guild series , you will love this series I am going to say its stands alone on its own merits but it also has the best of both series . So check it out and you will not be disappointed .
Posted by BOOKS TO CURL UP WITH at 7:54 AM