Welcome to Friday everyone , I really hope everyone is staying warm on this frigid cold day . Today we are going to review a new series by Rachel Rawlings . INK IT OVER  ( a Touch of Ink novel ) 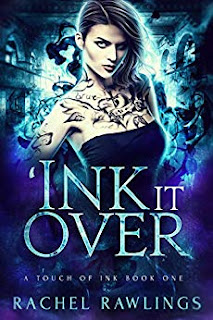 Tattoo artist by day and warding witch by night, Adeline uses magical inks, a tattoo machine, and the help of her best friend Lars to permanently imbue spells of protection onto her clients. Thanks to the Magistrate's greed and failure to protect its citizens, her services were in high demand.
But when Nicholas Marks walks through the door of her tattoo studio looking for an appointment, one of Adeline's wards isn't the only thing he's after. Forced into working for the Magistrate, he's been tasked with bringing her in.
With her cover story blown, Adeline has two choices: Run as far and as fast as she can, or stay and fight. Though she’s not ready to give up the only life she’s ever known, putting her trust in a traitor may end up being the worst decision she's ever made.

MY REVIEW
Welcome to SOMETHING TO INK ABOUT where Adeline works as a tattoo artist by day but when needed she does some very special tattooing . She is a warder a very special witch and very rare . Seeing as most of the warders have been killed by the Magistrate . things were going good until the day Nicholas walks into  the tattoo shop and her life. With her cover story blown out of the water she has two choices run or fight and if she fights can she trust the man that walked into her shop and is a traitor .
This is a new set of characters for this author and I must say Adeline is kick butt . She is sassy and no nonsense . She does kind of have a little bit of an anger issue that does come out through out the book . I love that she is a tattoo artist, cause really there aren't many books with female tattoo artists .They are usually men so Adeline is a nice refreshing read
Lars is oh lets just say he is all alpha male and Adeline's best friend . He takes care of her and is actually like the angel / devil on her shoulders . He keeps her safe and only wants what is best for her . But I think there is more to him that the author hasn't told us . He is sweet but really has an attitude some times .
Now lets talk Nicholas , I seriously don't trust this man at all . He just seems shady to me . He is the nephew to the Magistrate that is after Adeline so really do you know what side he is actually on . He may be tall and good looking but there is something about him that you just can't put your finger on . Is he really good or is he just playing Adeline . You decide .
This is a fun filled story that takes us on an adventure . The author has crafted a cool story that has wonderful characters and a really good story line.  There are witches and magic ,intrigue and a little bit of romance. I must say though it did take a bit for the story to get going . I felt like the first few chapters just a little slow . Once you hit chapter 4 it takes off and you are taken on an roller coaster ride . Over all I really liked the story and the characters . There is a cliff hanger at the end and I hope the second book comes out fast cause I really want to know what happens . So if you want a good witch story that has a kick butt tattoo artist this is the book for you .