Good Sunday all, today we have an author I have grown fond of from his fantasy books . Today he has gone to the fairies with his new book GRIM UNDERTAKINGS  book one of the Grim Faerie series by Whit McClendon. 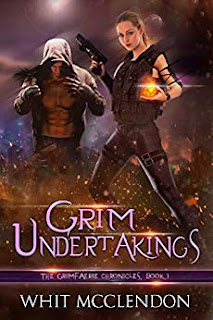 Not all of the Faerie are sweet little Pixies. There are a few who do the dirty work on the side of the Light. Unknown protectors walk among us, gleefully using fang and claw and magick, leaving a bloody trail of vanquished evildoers in their wake. They are the GrimFaeries. If you are evil enough to try to tip the balance towards the Dark side, you might just get a visit from one. And they won't be leaving a coin under your pillow.
When Kane the Grim is tasked with finding a serial murderer in Houston, he discovers that there is much more at stake. Magick is afoot, and an evil sorcerer is behind the killings. When he rescues a witch from certain death, his new mission becomes clear: stop the bad guy before it’s too late. Teaming up with a witch who's as good with a gun as with her spells, they'll face monsters, magick, and M-16's, as they risk everything to stop the evil in its tracks before all is lost.
If you're a fan of Jim Butcher's Dresden Files, you'll love the first tale of the GrimFaerie Chronicles, an exciting new urban fantasy from Whit McClendon, the author of the Fire of the Jidaan Trilogy!

MY REVIEW
Not all fairies are sweet and innocent little creatures, some of them have to do the dirty work and tak care of the baddies in the world . That is what Kane is doing , he is on the hunt for a serial killer in Houston . When he finds the killers next victim he is astonished at whan she can do to save herself. When he finds out there is more going on then he expected he decides to team up with Ariana and find out where the black magic is coming from . Will they survive the magic, mayham and the m - 16s that are attracting the evil .

I must admit I really got sucked into theses characters . Kane well he is strong and deadly . He is like a grim reaper for the evil. He can also kick butt and take names . Yet there is a side to him that is kind of sensitive and really wants to do the best for people .  Ariana well I love her , she is strong and sassy also she is a witch with some strong powers . They are so good each on their own but when combine their strenghts they are non stoppable . Elias Bress well man you guys are going to hate him . He is evil oh so evil . You really just want to slap him uside the head a few times through out the book .. There are so many characters in this book to count , we have pixies , trolls gargoyles and so many more .

I sat down to start this book and was wondering how the author was going to write in the fairy genres . What i didn't realize is how much i would get sucked into the story . I was sucked in from the very first chapter . I really wanted to get to know these characters and honestly their back stories . The author writes and interesting story with lots of twists and turns that will have you flipping pages all night long . There were a couple of places at the begining that were kind of a bit choppy but I truly loved this story and the characters . Now I have to wait for book two cause he does leave us with a cliff hanger .If you want an interesting take on all things fairies check out this book you will not be disappointed .
Posted by BOOKS TO CURL UP WITH at 11:56 AM