MADE IT TO THURSDAY

Good Thursday everyone . or as we like to say Friday Eve . Ok how many of you like Rocker love stories . well if you are one I have a new author and new book for you . J.C Layne and her book  FACE IN THE CROWD 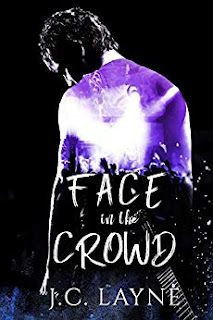 Jace DeLand is just tired. Tired of the groupies, the groping, the propositions. Tired of everything. Jace is the rhythm guitarist for Soul Harbor, a band who has been on a successful 20-year run and shows no signs of slowing down. Despite the success, something is missing. All of his other bandmates have gotten married and settled down, and he is tired of waiting patiently for his turn. He wants that kind of love, that someone special to spend his life with. But he’s almost given up hope.

Then, one night while on stage, he sees her. Her face in the sea of people grabs his attention and doesn’t let go. When she agrees to meet him backstage, his hopes are high, but it seems his reputation precedes him. Yes, he’s a rock star, but he’s over all of the bullshit that comes with it, he just has to figure out how to convince her of that.

Laney Mason is perfect for him in every way, exactly what he’s been missing in his life. But can it really work between them? Whatever it takes, Jace won’t give up on his shot at love.

MY REVIEW
What do you do when you are the rhythm guitarist of a successful band and the only single guy left in the band . That is what Jace DeLand is going through , he is tired of the one night stands and the groupies trying to grope him all the time . Until the night he sees her in the crowd the one woman that could be the one . Laney Mason is the one who Jace thinks could be the one that he has been waiting for . Will they find their ever after
I must say the characters are cool characters and are written well . Jace is kind of brooding at the beginning of the story . He is just tired of the life of a rock star . He is sometimes kind of annoying with his melt downs and crying . Over all he is an enjoyable character and you do want to get to know him better . Laney well sometimes she is great and sometimes she comes off just a little naïve . I give her credit though she is sassy and does keep Jace on his toes .  Piper is my favourite character , she is Jace's sister and the no nonsense one , she keeps Jace on the even keel . She is funny and the sensible one sometimes . Over all the characters are a fun read .
I sat down and read this book in an evening and started reading it is a fast read so I had it done in a couple of hours . The author takes us on a rock and roll adventure . The characters are cool but sometimes they come off just a little bit childish and you just want to wrap them up and hug them telling them everything will be ok . There are also a couple of time the story seems to drag just a little . Over all I truly enjoyed the book and the characters . If you like rock star books and want a good read for an evening check out FACE IN THE CROWD .  You will have a fun time reading .
Posted by BOOKS TO CURL UP WITH at 7:55 AM