Welcome to Sunday and HAPPY MOTHER'S DAY TO ALL MOMS . Today I have a new to me author. C.R Robertson and the book DRAGONS OF DESTINY (The Gaian Otherworld book one ) 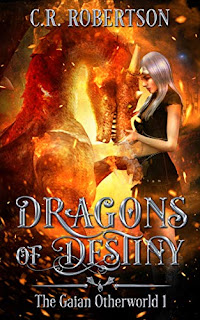 Magic is real and lives among us.

Several billion years ago the goddess Gaia created the earth, bequeathing her greatest gift – magical beings that formed the Seelie and the Unseelie fae courts.

Relationships are prohibited between the fae clans - but then the forbidden fruit is always the sweetest and hardest to obtain.

Ruben is a high-level mage of the dark fae, Allura belongs to the light fae. From the moment Ruben first set eyes on Allura she captivates him until he is willing to risk everything to possess her.

Her touch inflames him, releasing more than just white-hot passion when his hidden dragon emerges to claim his fated mate. All rules are burnt to ash when the dragons emerge to protect the earth from the greatest threat in over a thousand years.

Take a heart-stopping plunge into a hidden magical kingdom.

***WARNING*** Includes a kick-ass, sarcastic, deadly hero who is determined to claim his fated mate no matter who he has to smite along the way.

Dragons of Destiny is the first in The Gaian Otherworld and although the foundation of the series, it can be read as a stand-alone paranormal romance.

When the goddess Gaia created the earth she gave us the most beautiful of all creatures the magical kind . We have the seelie and the unseelie courts in the fae world . When the relationships between clans are prohibited but when you want something you will do anything to get that forbidden fruit . When Ruben a mage for the dark fae meets Allura who is part of the light fae . The attraction is undeniable and he will do anything to claim her Will Ruben be able to claim her just as his dragon has done or will they be burned as the dragons rise to protect the earth from the evil that is coming
The characters in this book are actually kind of fascinating . We enter a new universe full of Greek and Roman Gods . We also get to meet Ruben and his mate Allura . Oh my what can i say about Ruben, well he is sarcastic no holds barred hero who will do almost anything to will get his fated mate come crook or by hook . I must say i really liked Ruben he is rough and gruff and honestly doesn't take no for an answer .  Allura is well lets say she is kind of like Ruben but she is light fae . They are such a strong set of characters that really balance each other out . I really like them together as a couple, even though Allura seems to fight Ruben the whole way . There are so many other characters in this story that help them out on their quest .

When I sat down to read this story I was like I am not sure what I am getting myself into .I started reading and was pleasantly surprised, the story is fast paced and had me turning pages really fast . The characters were well written and the story moved along nicely . Then the twists and turns start and you start going whoa when did that happen and wow how are they going to get out of this one . I was pleasantly surprised I enjoyed this story. So if you want a fun read check it out and add it to your summer reading list