Welcome to Wednesday today I have the second book in the Paragon Trilogy by Bree Lewandowski ,ROGUE . 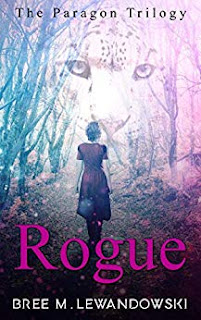 War was imminent. It was only a matter of time before it reached her lands.
The Rubiconds were marching to attack Meridionalis which would only end in a battle of bloodshed and lives lost, but after receiving a letter from the father she had never known, Abra Arendel sets off on a quest to meet the only parent she has left.
While on her journey, an unfortunate incident leaves her fatally wounded and left for dead. Regaining consciousness, she finds herself in a bathhouse where she meets a charismatic smuggler named Saya.
Needing to blend in among the wealthy to sell ill-gotten gains, Saya proposes a scheme for he and Abra that will benefit them both. But the plan goes sour when passions ignite and vengeance rears its beautiful head.
Desperate to reverse a spell cast on him suddenly, Saya reaches out to Kohl, the one person in the Court of the Rising Sun that he knew could help.
Tensions are high and so are the stakes in this fantastic tale of love, loyalty, and fate.
The saga continues with Rogue!

MY REVIEW
With war on the horizon and a letter in hand Abra Arendel heads out to find the father that she has never known. On her way to find her father she is injured and left for dead . Waking up in a bathhouse she meets charismatic smuggler named Saya. Together they hatch a plan to fit into high society to sell his ill gotten goods . When a spell is cast on Saya he must  reach out to Kohl to help reverse it . The stakes are high and love is the prize .

I must say the characters in this story are well written . Saya well he will be your next book boyfriend . He is sexy and a cad . He can make you do almost anything .Abra is sweet and kind of naïve at the beginning of the book . She hasn't had an easy life and doesn't have a lot experience with men . But they are so good together and I loved them as a couple . Kohl is back to help out .

This is a fast read , I sat down and started reading . The characters are great and you will love them . The banter between them is so good it feels so real . In this book the author keeps us on the edge of our seats most of the time . It is a little be more intense then book one and you learn a lot more about the characters and the background of the impending war . I will say at the beginning it took me a little bit to get into Abra's story but once I got to chapter 2 it took off and I couldn't put it down . I say that you should put this series on your summer reading list . Great for the beach .
Posted by BOOKS TO CURL UP WITH at 8:17 AM