WELCOME BACK TO READER ROUND UP

Welcome back to reader roundup this is the first book in the novels part . Today I have QUEEN  by J. S Fields 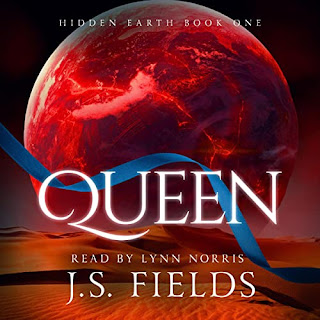 Nobody leaves Queen. On the tidally locked, women-only planet, a vulva and an authority problem are the only immigration requirements. Emigration is banned.

Ember spends her days cruising Queen’s endless sand dunes, hunting sand pirates, and wallowing in memories of her dead wife. After an ambush, Ember is dragged to the pirate camp and learns her wife’s biggest secret—before her death, she’d joined the pirates, built an illegal spaceship, and plotted to leave the planet.

Ember’s sister, Nadia, hatches a desperate rescue that leads her to the very edge of the habitable zone. There, Nadia stumbles across other secrets kept—a flourishing, impossible ecosystem and a New Earth mining installation. Queen’s hidden resource, highly sought after and limited, should have made its inhabitants rich. Instead, Queen’s scientists live in decaying houses, battle the elements, and struggle to eke out a living.

Ember, Nadia, and the sand pirates must take back the planet and expose the corrupt New Earth mining. Taming giant beetles, wrestling stinkhorn fungi, and enlisting Queen’s rabbit population in a high-stakes aerial battle are just part of the hijinks that will determine Queen’s fate as a galactic player, as well as the futures of all its conscripted inhabitants.

The newly minted outlaws must also grapple with Queen’s narrow concept of “womanhood” and where trans and intersex people belong in its future.

Queen is the planet that once you are on it you don't get off . Ember is living on the women only plant where she hunts space pirates and mourns her wife's death . Until the day she is ambushed and dragged to the pirate camp . Where she finds out her wife's last project  an illegal ship to get them off the planet .  In the mean time Ember's sister Nadia is a scientist and she stumbles upon a secret flourishing ecosystem and a mining project that is making someone on New Earth very rich . But the scientists live in decaying housing , eking out a living in the cold . Ember ,Nadia and the sand pirates band together and take back the planet .With the help of the rabbits and beetles yes I said rabbits and beetles ( you have to read to find out more ) To determine the galactic placement of Queen and her inhabitants. The group must also grapple with Queen's narrow ideas of womanhood and where do the trans and intersex people belong

There are so many interesting characters in this novel . Ember well she is just surviving on this planet . She is stronger then she lets on but she is heartbroken over loosing her wife . She does come out a real fighter . Nadia well she is also a fighter , she left her husband to be with her sister and man she is smart and wants to figure out what is going on . I felt she is like the other side of Ember . Nadia wanted to keep Ember safe . There are also a whole cast of characters that are part of Ember and Nadia's life . The characters are very well written and complex . I think my favourite have to be the rabbits and the beetles not going to look at those animals the same way ever again .

This is one of those books where you get dropped into the story and it goes off from there . The characters are well written and the story is one of winning back your freedom .  You are transported to a place where you can come but you can't ever leave . This is the first story that I have read with a intersex character and the author did a great job of keeping the character real . The author also writes on where do the trans people fit in cause the planet was for women with vulva's . Its like real life in some chapters like where do people fit in and what happens when they don't . There is a romance in the book but it is lightly touched on . There is humor , rabbits and beetles . You have to read to find out but I will never looks at rabbits the same way again. So if you want a book that will make you think check it out.