Hey all hope you all are having a great Thursday . Today we are going an author shout out for a cool indie author from Australia. KC RILEY- GYER. She has two indie books out right now, You can get them on her website http://www.kcrileygyer.com/index03.html 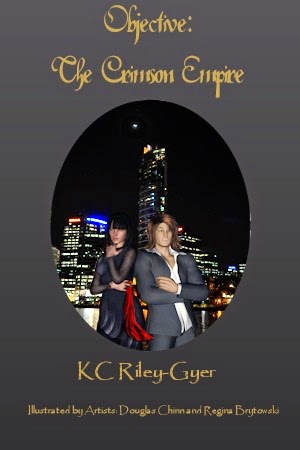 Looking like the 'girl next door', Sonja works in an advertising company; until her second job demands her attention. Then, she is anything but the 'girl next door'. Accepting a job with very little details, her reconnaissance finds her embroiled in vampire politics when her mark turns out to be one of the good guys. Maybe. Assigned to kill a major player, Sonja must decide between completing an assignment or follow her heart; not just because she is attracted to her mark but for humanity's sake.
Enola and Sonja are from different sides of life but their paths cross when each of them meet the men of their dreams in two separate events. Or are they? The only hitch is the men are vampires and they drag the two women into a situation that could lead to a battle of control over the capital city of Queensland. Have the two women chosen the right side? Only time will tell.

I read this book and loved it .


SECOND BOOK IS CHANGES IN DEGREES 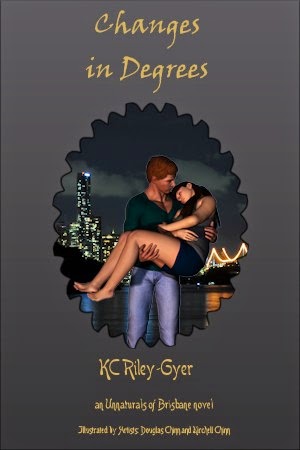 After the death of her husband in an accident that left her with a permanent disability, Sarah's existence becomes a little less mundane when two men enter her sights during different stages of her life. One a man of mystery who waltzes in and out of her life, and one from fiction-come-reality who doesn't hide his feelings for her. Both vastly different yet both predators and she is attracted to them both. However, each of the men bring their own challenges into her life and to her beliefs. Whom will she choose as each, in their own ways, bring changes in degrees?


I am just starting this one. Can't wait to read

EXCERPT FROM THE BOOK 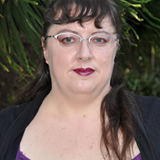 Back in 1967 KC was born on the morning of a black Monday on the Sunshine Coast north of Brisbane, Queensland, Australia. She is the eldest of two brothers and two half brothers, and her parents were (before retiring) typical Aussie hard workers. KC is the first to admit that her life growing up was nothing special with the usual ups and downs but can claim she never broke a bone in her body until she was 34 years old. She had the usual pets of cats, dogs and budgies, but can’t recall any fish. While a lover of all animals (except annoyingly yappy small dogs, she laughingly comments), she especially loves german sheppards, samoyed, wolves and the majority of the cats large and small.
Apart from her love of animals, the one thing she does remember – and still a large part of her life today – is her love of books. She still has her copies of ‘Dot and the Kangaroo’ and ‘Snugglepot and Cuddlepie’ she had received between the ages of 5 and 9. These days KC limits her buying of books due to so many of her favourites being part of a series. She hasn’t been that successful. Much to her amused annoyance.
WHERE YOU CAN STALK KC AT
http://www.kcrileygyer.com/
https://www.facebook.com/KCRileyGyer
https://www.facebook.com/KCRileyGyerAuthorPage
https://www.goodreads.com/KCRileyGyer
Posted by BOOKS TO CURL UP WITH at 8:17 AM