hi all good thursday all

Well it is Thursday and I am awake and writing early in the morning. It is only 8 am here in good ole Saskatchewan. The sun is shining and the wind is down for now. So onto today's book is
MINSTREL'S CONVENANT  by Nance Bulow Morgan 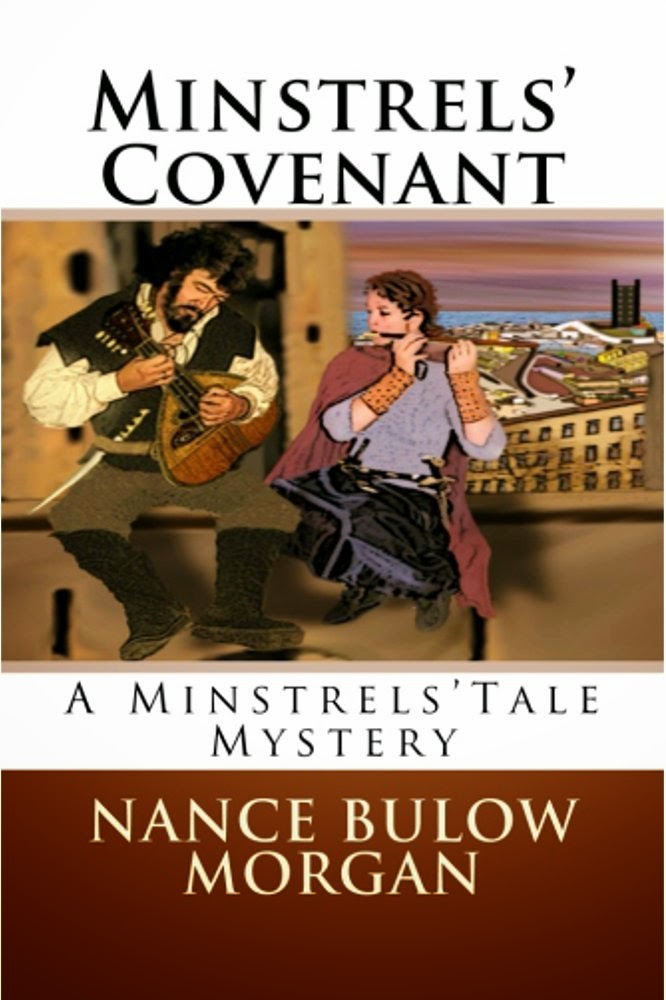 Mareese was still recovering from a two year old rebellion and a one year old battle with demons from the gates of hell. Saeede and Andreas lived there, happily composing songs about their last great adventure.
While across the sea in Nagrom a young king sought to change the culture of war amongst the kingdoms of his continent. He sought a trade treaty with the people of Crystalier and sent his friend and ambassador to Mareese to promote his idea.
At the reception to introduce the ambassador to the leaders of Crystalier everything was going superbly, until the ambassador was stricken with convulsions and died—the victim of poison!
The ambassador's men broke diplomatic protocols and arrested a local shopkeeper; an apothecary, and Saeede's mother! Saeede and Andreas launch a secondary investigation behind the scenes.
The investigation is nearly botched when the ambassador's man realizes who Saeede is to the apothecary. This creates a delicate diplomatic dilemma. Saeede would not be swayed and discovered an imposter afoot—an imposter who looks like the ambassador's daughter! When they are about to close in, the imposter gives them the slip, and the chase takes them across the sea to Ahnges. There it becomes apparent that political gain is at the root of the problem.
Thrust into a tangle of mistrusting kings the two friends are called upon to apprehend the ambassador's assassin and uncover the instigator behind the murder.
Minstrels' Covenant is Bulow-Morgan's third release. A mystery adventure that spans two countries with very different cultures. The reader will be hooked from the very beginning of this intricate tale.

MY REVIEW
Welcome back to the fantasy world again, we find Mareese recovering from the two year rebellion and the war with the demons. We find Saeede and Andreas there composing songs of their adventures .
While across the sea a young wants to set up a trade treaty with Mareese so he sends an ambassador to promote his plan, Everything is going great until the ambassador dies. Not knowing anything the guards arrest a local apothecary store keeper. Which happens to be Saeede's mother. Now that sends Andreas and Saeede into another mystery and they start their own investigation. As they work their way through Saeede finds out there is an imposter amongst them. This investigation takes them across the sea , Where there is political gains to be had and is the root of all things . As they close in and will they find the assassin
Again Nance takes us on an adventure like no other. She starts out with a bang and just lets us go from there. Saeede and Andreas were having a quiet time just writing music and regaling in their last adventure. Then all of a sudden they are swept up into another adventure where there is more at stake. The power of kings and a trade treaty are all in the mix this time around. You start reading and you just let the pages take you away. There are power struggles and young kings that want to prove themselves. Throw a murder and the pages turn themselves .  This story has a timeless quality about it. I mean it could happen in today's world Between two countries and their politicians. Power is always the root of all things that go on in the world of politics may it be in the times of old or now a days.
Andreas and Saeede are back and stronger then ever, there is also a new cast of characters that make an appearance in this book. They all add to the story line. Nance has a sense to make the characters their own. Its like you know them and you want to cheer for them and cry when they cry. I love Andreas and Saeede. She is a strong heroine that can kick some butt when needed. Andreas is her best friend and is also a great hero. They are like a fantasy mystery solving duo. They rock .
Nance has written a great second book for the Minstrels series. I am hoping that there will be a third book. I really enjoyed these books and was so happy to be given the chance to read and review them. I love to read and love all types of books. I really think that anyone between the ages of 15 to 85 would love these books. I would recommend them to anyone who wants to have a great summer reading a fantasy book or two . So check them out