Good day all , today I have the fourth book in the Guardians of Scotland . HIGHLAND HOPE  by Victoria Zak. 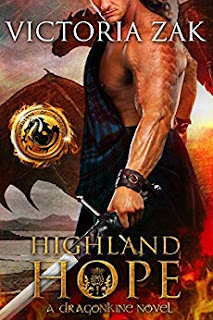 If the scars on Maggie’s body aren’t enough to remind her of that truth, the terrifying demons that plague her nightmares do the trick. Her vengeance runs deep as she sets out on a soul crusade for justice. She will kill her fear. She will kill a dragon.

When did he become a hero?

Deceit became second nature to Dragonkine warrior, Caden Ross, until he held Maggie in his arms. But she could never know his true nature, the Dragonkine blood pulsing through his veins. By night, his dragon magic slays the demons in her nightmares. By day, he walks by her side, longing for a time when she could love him and the beast that lurks inside him.

Lines are drawn and war begins.

With the awakening of the tyrant Dragon King Drest and the Death Dragons breathing down his neck, Caden must warn his family and unite with his brothers to protect the ones they love.

Will Maggie overcome her need for revenge and fight with him, or will he win the battle, only to lose her forever?

MY REVIEW
Welcome back to Scotland and Caden and Maggies story . Caden Ross has been a loner for a long time . Until the day he held Maggie in his arms and got her safety . He hasn't been able to walk away from young woman . He is there in the night when he heals her nightmares and is there in the daylight to be beside her and keep her safe . She has a mission to kill a dragon to maybe easy the wounds of what happened in her past. So Caden has to hide his true nature from Maggie . With the Dragon king awake and the death dragons getting closer and closer . Will they be able to keep each other safe and will Maggie over come her fear to love the man that is also the dragon that has her heart .
I must say that the author really out did herself with  these characters . I love all the characters in this series but Caden and Maggie have a soft spot in my heart . Maggie is such a sweet girl you will fall in love with her . She is carrying some very heavy scars though both physcially and emotionally . She is sweet and sassy and doesn't take any guff from anyone especially Caden. She hates him or does she, and it is fun watching her come to terms with her feelings .  Caden is well lets just say wow , he is strong and sexy and oh so cocky . He is trying to come to terms with what it is like to have a family dynamic around him. He also is fighting feeling for Maggie , he thinks he doesn't deserve her and wants to leave but he can't . He is a great warrior and somewhat of a cad . You will love him and you will want him to get together with Maggie so much . They are wonderful characters an deserve happiness that only they can have .  Conell , James and the rest of the clan are back to help Caden and Maggie realize that they belong together .
I settled down and read this book in an evening . The characters are well written and complex. The author takes us on an adventure of epic proportions . There are dragons, evil entities , a mystery and oh so much romance .  I love the dragons in this series they are all steeped in history and make for such good reading . The author blends history and the lore of dragons flawlessly . I read this book in about 3 hrs . I couldn't put it down  I was sucked in by the end of chapter one . If you want a great story that will have you laughing and crying and laughing again this is the series for you . Check it out.
Posted by BOOKS TO CURL UP WITH at 11:05 AM