MADE IT THROUGH EASTER

Happy Monday all , I hope you all had a great Easter weekend . I chilled out all weekend , read and ate chocolate . Found a new book for all you Dracula fans . THE NIGHT CROSSING by Robert Masello . 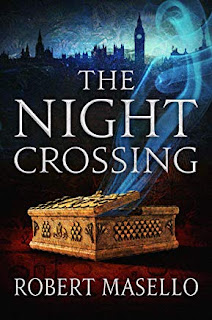 Bram Stoker kept secret a tale even more terrifying than Dracula.
It begins among the Carpathian peaks, when an intrepid explorer discovers a mysterious golden box. She brings it back with her to the foggy streets of Victorian London, unaware of its dangerous power…or that an evil beyond imagining has already taken root in the city.
Stoker, a successful theater manager but frustrated writer, is drawn into a deadly web spun by the wealthy founders of a mission house for the poor. Far from a safe haven, the mission harbors a dark and terrifying secret.
To save the souls of thousands, Stoker—aided by the explorer and a match girl grieving the loss of her child—must pursue an enemy as ancient as the Saharan sands where it originated. Their journey will take them through the city’s overgrown graveyards and rat-infested tunnels and even onto the maiden voyage of the world’s first “unsinkable” ship…

MY REVIEW
When a golden box is found in the Carpathian mountains and is brought back to Victorian London. They don't know the power and the ancient evil that is taking root in the city .When Bram Stoker is pulled into the deadly world spread by the founders of a mission for the poor which harbours a very dark secret . Stoker , they explorer and a poor match girl must find the ancient enemy . The enemy will take them on an epic journey that will lead them to the unsinkable ship .

The characters in this story are well written and you will really like them . Stoker is a man wanting to find adventure  He is ailing and just wants to have adventure .  Mina is the explorer that helps Stocker out , She is an adventurer and also ends up as a character in the book . She kicks butt and helps  Stocker through a lot, Together they ar a formidable team tracking down the evil .
I sat down and started reading this book in the evening . and at the beginning of the book I had a hard time getting into the story . As I read though I really started to get into the story . It was a roller coaster ride that took us from the mountains Carpathian mountains to the back alleys and graveyards of London .The author has a way of drawing you in and keeping you on the edge of your seat the whole time . The suspense will keep you reading all night long and the supernatural parts of the story will grip you and hold you tight. There were times in the book it just seemed like it shouldn't be there . Like the time with the Titanic just didn't fit in and it dragged . Over all I did enjoy the book and would reccomend it to anyone who loves a good mystery and supernatural elements were great . Check it out .