Woohoo we made it to Friday . Today I have a new release for you by Robbie Cox . BEAR NECESSITIES ( the Bull Creek Chronicles book 3 ) 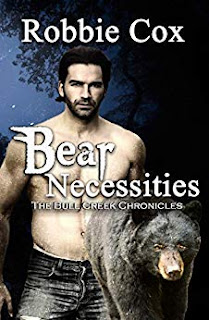 An mission that haunts him, a little girl who needs him, and a stranger who won’t leave him alone.

Existing isn’t living, but for Ezra Havlin, existing is enough. Once a member of Para-Force, Ezra was in the midst of the action, adventure around every corner as the paranormal special ops team protected those unable to protect themselves. That is, until one mission went sideways, and a child in his custody was murdered.

On the outskirts of Bull Creek, Josh Rayburn discovers a hermit living off the bare necessities of life, if that could be called living. Now, Josh is determined to bring this sullen hermit into the Bull Creek family whether the man wants it or not.

However, for Ezra, the past returns with a gut punch when members of the Para-Force team arrives with another case and a another child. Can Josh convince Ezra that people are a vital part of the Bear Necessities of life in time to save the little girl’s life?

MY REVIEW
When Ezra Havlin is trying forget the mission that almost got him killed and killed the young girl he was suppose to protect . Now living off the land and not wanting anyone around . When Josh Rayburn finds him , he does his best to get Ezra into Bull Creek . Without a lot of success until the day that the para - force invades his space with another case and another child that needs to be saved . Will Josh be able to convince  Ezra to come into the community and help save the girl .

I love the characters in this book,  Ezra is a grouchy bear that has been through a really bad trauma that has shaped him . He is actually a sweet guy under it all .The rest of the para force is back and trying to save a young girl .  You will fall in love with all of these characters and the town that takes in those that need to get lost to be found.

This is a fast read and you will sucked into the story the characters are well written . The author takes us back Bull Creek and its cast of characters .  The story is complex and you will be wanting to hug Ezra and then you will want to slap him upside the head because he is so pig headed . This is an emotional story that will have you wanting more from him and the rest of Bull Creek . I love these stories and I can't wait to see what the author does in the next installment . I am hoping crossing fingers we get a Colton story sometime . So if you want a emotional read with lots of snarkiness and sass . Oh and a possessed or not possessed doll this is the story for your winter reading list .
Posted by BOOKS TO CURL UP WITH at 8:07 AM