Good Friday morning everyone . Today is release day for a new series by Victoria Zak . EINAR Breaking the Sea ( Lords of Valhalla book 1) 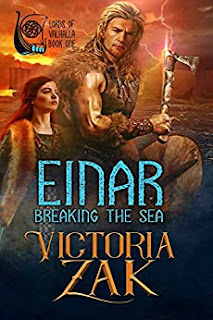 He had something to prove.

Einar, the youngest son of Jarl Rognvald ambitiously sails to uncharted territory to prove he can do the impossible: regain his family’s land from the merciless, pirating Danes. When the Danes don’t leave peacefully, it will take an act of Odin for Einar to maintain his iron grip across the perilous island.
Stranded in the Kingdom of Alba after a surprise attack, little does Einar know that Thor’s hammer is about to strike his heart. A brief encounter with a warrior tribe, led by a red-haired lass and her sword, could be his undoing.

A warrior at heart

If watching her father die by the hands of Northmen wasn’t bad enough, the newly crowned king of Alba has bartered a truce with them. Maeve Donald, chieftain of her clan, would rather kill the Norsemen than be forced to be allies, but when the Danes capture her brother, they may hold the key to saving him.

Attracted to the dark, brooding Viking Einar, Maeve’s loyalty to her clan is tested when he offers a plan to rescue her brother. To save him, she must reconcile a lifetime of loathing with her unwanted desire for a heathen—or risk losing everything she loves.

MY REVIEW
Einar a young Viking warrior is doing the impossible and sailing back to get his homelands back from the Danes that will not leave . After a storm he and his mans are stranded on the aisle of Alba and is struck in the heart by a fierce warrior princess and her tribe of warriors . Maeve is attracted to the brooding Viking but is scared to give her heart away after watching her father die . Will they be able to find each other before its too late and will their love bring them together or push them apart.

Ok I am just going to say it right here right now Einar is swoon worthy . He is strong and oh so sexy . He is brooding but underneath he honestly has a heart of gold who will keep those he loves safe .  Maeve she is feisty and wants to avenge her fathers death. She is also hurting deep inside . She wants to love but is scared to . She can fight just as good as any man in her clan . They are such well written characters on their own . Together they are unstoppable . I truly loved these characters and the all the characters in this book . There are a few to mention but you will fall in love one or all the characters .

Ok I have read other Viking stories but never liked them as much as I did this story. The characters are well written and complex , you can't help but fall in love with them . The story is complex and you get sucked in from the very first chapter . The author takes us on an emotional roller coaster ride that will keep you on the edge of your seat . There are moments where you actually want to smack each of the main characters upside the head cause they are being so stubborn.  Your kindle will also get a little bit hot with some of the scenes . There were moments I think I actually blushed .  This is going to be a good series and can't wait for the second book in the series . So if you want a great book to read this Christmas check out the heathen and warrior princess in Einar . You will not be disappointed .
Posted by BOOKS TO CURL UP WITH at 7:17 AM