Ok my peeps are you guys ready for Christmas yet . Only two weeks and counting I can't believe it snuck up on us so fast . If you are in search of a series to give the reader on your list. This might be the series for you .  The Sacred Oath Series by Plum Pascal aka HP Mallory. DRAGAN  A reverse harem is the second book in the series . 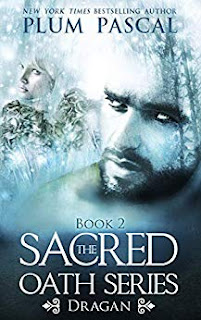 I thought I was a pure-bred angel, but I soon find out I’m so much more…

When huge, black, rubbery wings shoot out of my back, I learn I’m part Succubus, part demon.

Even with this epiphany, I’m still no closer to understanding who I am, where I came from, or why I’m missing my memories.

Worst of all, the one person I trusted above all others, Dragan, the King of Shadow, turned on me. You’d think the fact that we both possess shadow magic would bring us closer, but it doesn’t.

Learning I’m a crossbreed, Dragan shuns me. Where once we shared passionate embraces, now he’s coldly suspicious and distant. And the King of Nature, Cambion, treats me even worse, rebuking me with expressions of disgust and rude comments.

Strangely, Baron, the King of Death, is the only one who accepts what I am. He says it’s because we are one and the same—the shadow magic that animates him, also animates me.

Good thing I have an ally in Baron because I’m stranded in an unfriendly world I know little about. Everywhere I turn, enemies are after me, eager to return me to the King of Angels, Variant, who wants me dead.

With the way things are going, I wonder if Dragan and Cambion still believe I’m the answer to defeating Variant or maybe they’re more inclined to deliver me to my fate at Variant’s hands…

###
Dragan,
The King of Shadow

I’ve fought my closeness with Eilish for this reason. Maybe it’s why I reacted so badly at discovering she’s more than she is—that she’s Succubus. Maybe my reaction was just an excuse to crawl back into my hardened shell, to refuse to be close to her.
No, I tell myself. Your reaction was born from the fact that she fooled you. She seduced you and you fell for it, because that’s what Succubae do.
Yes, I know only too well what Succubae do—how they destroy a man, how they suck from him his very will to live.
It’s hard to be near her, especially when only a few moments ago I was reminding myself how dangerous closeness was. I continue to question who the true Eilish is—an innocent angel, or a highly deceptive demon?

###
Cambion,
The King of Nature

She appears so alone out here. So small. Not the creature I’ve become so wary of, but a confused girl trying to navigate a world of which she knows very little.
Regardless, my sympathy is in short supply, and I refuse to reveal the softer side of my feelings toward her. Ever since Variant’s betrayal, trust is not a commodity in which I’m willing to trade.

She’s clearly a crossbreed. And as a crossbreed, I’m convinced, she’s all the more powerful, able to draw on the powers of light and dark. Furthermore, I must also admit this darkness within her appeals to the darkness within me. I knew there was something about her that called to me.
Unlike Dragan, I’m not attracted to her angelic nature. Her lightness might entrance him, but it does nothing for me.

Large hands grip my wrists as the right side of my face bashes into a large and broad chest. When I look up, I find Dragan glaring down at me.
I’m relieved.
He’s furious.
“What are you thinking?” he demands. He doesn’t drop his hold around my wrists but continues to clutch them, as though he’s afraid I’ll take off if he releases me…
MY REVIEW
Dragan is the king of shadow and he and Eliish have a bond that has now been broken because of what she is part angel and part succubae .  They were so close but now he has pushed her away and into the arms of another king sent to keep her safe . Will they be able to get past the past of Dragan and will they be able to keep her safe . That is their destiny and they will win but will their hearts come out in one piece .

This is Dragan's book and boy what a book it is . I really liked this character from the very first moment I read him in book one . He is sexy oh so sexy and brooding . We also find out more about what happened in his past and why he ended things with Elish.  There are moments in this book i really just want to pull his head out of his well you all know where . shake him and tell him to get his head back in the game .  Elish this poor girl is now more confused then she was in the first book. She still doesn't have her memories but she has found out that she does have a demon side to her . You just really want to either shake her and tell her to toughen up or wrap her in a blanket and hide her from the world.  Cambion and Baron are also back . Cambion well he really needs to lighten up a bit or he is going to get the slap upside the head . Yes you can tell these two men need and attitude adjustment . Baron actually grew on me in this book . He has grown and Revenant aka Baron is a really complicated man . You don't know if he is really bad or good . These characters are so well written and complex . They work well together .

In this book we learn so much about Dragan and why he is acting the way he is  and pushing Elish away . The author takes us on a very bumpy ride through this book . Your emotions will be all over the place. One moment you will be laughing along with the characters and the next moment you will have a tear rolling down your cheek or blushing from the hotness that is pouring out of the book.  The author will draw you in and make you care about  these characters before she rips out our heart and then repairs it . I read this book in a evening . I couldn't put it down. So if you want a great series for the winter this series is for you . Hot sexy brooding men and the woman who is more and could love them with all her heart . If she gets her memories back.
Posted by BOOKS TO CURL UP WITH at 1:08 PM