Well it is Friday day oh I just give up on days . I have a great book for you today its book two in the HAPPILY NEVER AFTER Series by Plum Pascal . Let me introduce to GOLDY 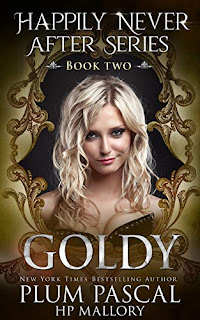 Kassidy Aurelian, otherwise known as Goldilocks, is a Guild thief, and has one goal and one goal only. Find and obtain the coveted Ambrosia from the werebear kingdom, no matter the cost.

Once Kassidy has the Ambrosia in hand, she comes close to escaping.

But close doesn’t count when she’s facing the wrath of three werebears… Leith, Nash and Sorren, all who happen to be as naked as they day they were born.

Once captured, Kassidy faces a difficult choice: Either take the punishment for her theft—a punishment which will almost certainly kill her—or choose submission. Submission = two weeks in each of their beds, sacrificing her virginity in the process.

As if that weren’t bad enough, Kassidy can’t stand Nash and she’s scared to death of Sorren.

With a mutual enemy rising in the underground kingdom of Grimm, Kassidy realizes she needs help from the three bears in order to beat this enemy back. But, the road to their help is paved with her naked and willing body.

To save herself and her people, is Kassidy brave enough to climb into bed with three sexy shifters and literally bare all?

MY REVIEW
When Kassidy , a guild thief , comes up against three of the hottest and the deadliest men she doesn't know what she is in for . After she steals the ambrosia a sacred healing potion from the werebears . She is caught and has to pay for what she has done . When there is a mutual enemy that rears its ugly head . Kassidy and the men realize that they must help each other to stop this enemy. Kassidy also realizes that to have the help she must climb into bed with each male . Will she be able to leave and go back to the guild or will her heart stay with her sexy werebears .

This is such an awesome retelling of Goldilocks and the three bears .  Kassidy well we met her in book one and I loved her there . In this book she is such a fighter and oh so sassy . She has so many great quips and one liners that come out of her mouth . She is such a fun character to read . But like with every great sassy character there is more to her then  we know The three werebears Leift the king of the clan , the sweet handsome man who is intrigued with the little thief . Dash well he is the grumpy one who is the soldier who will fight you in battle and the bedroom . Sorren is well he is scared one who you realy can't trust . He has been through so much and has been changed because of it . These characters are so well written and complex . I really love these characters .

This is the second book in the series and I will say that I really liked this one . The author has some great twists and turns through out the book that will have you on the edge of your seat, There is also some oh so sexy times that just might melt your kindle . There are some great scenes . You will fall in love with this book and this series .  I got sucked into this story from the first page . Check it out you will fall in love
Posted by BOOKS TO CURL UP WITH at 8:49 AM