Good Monday morning , I have lost count on what day of quarantine this is . I have lost all track of time . |I really hope that everyone is safe from the apocalypse and the storms that are rising up . To help pass the time I have a new author for you to read  THE HUNTED MAIDEN by Douglas Pierce , 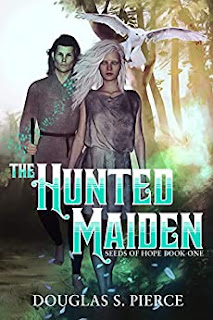 “Return this kindness by giving the gift of music to someone else in their time of need.”

Mouse—a fugitive and former stowaway—dreams of becoming a musician. By following the melody of his heart, he hopes to escape the grueling work and harsh punishments doled out aboard the Hunter’s Ghost. Gifted a flute by an enigmatic man, he finds himself closer than ever to achieving his goal. Yet to his surprise, it’s not freedom the music leads him to but a strange Fae prisoner. She alone is the sole being he’s ever encountered without a personal song.

“The Enemy comes for you, child. A foe like no other.”

Those dark words spoken by an ancient seer haunt aerialist and animal trainer Seldy’s every waking thought. When dangerous strangers kidnap her in the midst of a deadly Fae storm, she fears this malicious threat is coming to pass. Now, her survival depends on escaping from the ship she’s being held on, and finding a way back home before the shadowy being—known only as the Enemy—comes for her.

Forced together by their intertwining fates, Mouse and Seldy embark on a quest to uncover the secrets of Seldy’s past. Can they arm themselves with her precious truth in time to fight the dark forces eager to claim and corrupt her?

Fans of epic fantasy will love the journey of sacrifice and hope found in The Hunted Maiden!

MY REVIEW
Seldy and Mouse have their fates entwined and have to embark on a quest to get Seldy's past .  Will they be able to get to the truth before the dark forces claim Seldy as their own,

This is a fantasy story with a wide variety of characters the two main characters Seldy and Mouse are very well written . Seldy is a sweet girl who has a talent for talking to animals .  She is sweet and kind but she is also stronger then she lets on at the start of the book . She has been through so much bad in her life .  Mouse has been through so much in his young life .   He has been orphaned , hunted by gangs and rejected by people . He finally finds a way out of his troubles . We watch him grow as he and Seldy are entwined together . There are so many characters that come in contact with each other . I like the way there is interaction between humans and elves and how they communicate with each other .

This story is an epic fantasy that will take you on an adventure of epic proportions . The characters are well written and you can't help but fall in love with them . I like that the author gave us both stories side by side and it didn't get confusing . There were quite a few OMG  moments through out the book and I was on the edge of my seat most of the way through the book . I will admit though the first part of the book was a little confusing but it all gets straightened out pretty quiickly . Over all  I truly enjoyed this book . So if you want an epic fantasy jammed packed this is the book for you .
Posted by BOOKS TO CURL UP WITH at 8:56 AM