Welcome to day I have no idea anymore . I hope everyone is making it through this isolation with a smile on your face and a great book in your hands . If you are looking for a good book I have the one for you . It is a brand new series by Plum Pascal/ Hp Mallory .  Here is the first look of SNOW  a reverse harem fairytale . 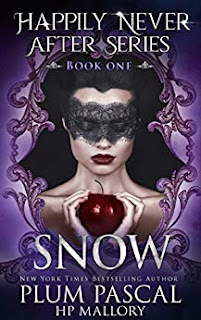 Bought and sold for male entertainment, Neva Valkoinen, or Snow White, as patrons know her, dances for the wealthy and lecherous at the Wicked Lyre Tavern in the city of Ascor.

Void of her memories, Neva’s life before the age of twelve, is a mystery she has no time to solve, chained as she is to the cruel whims of her master.

Enter Herrick Vorst. The most handsome stranger Neva’s ever seen. Herrick purchases a night with Neva but doesn’t touch her. Instead, he asks her questions she can’t answer and reveals his belief that she’s a witchling capable of great magic.

When Neva is purchased by another stranger a few nights later, she learns this one wants her heart. To carve out.

Narrowly escaping certain death, Herrick comes to Neva’s rescue and brings her back to his cottage where she meets his brothers, Reve and Malvolo. Reve is currently stuck in the land of dreams, courtesy of a curse. And Malvolo is surly, letting it be known he wants nothing to do with Neva. Well, he might want something to do with her body…

With no other options, Neva is forced to put her trust and hope into these three sinfully sexy brothers who hide a secret of their own…

Searching for answers to her past, the four embark on a journey into the shadowy world of magic and monsters, wars and treachery, and lustful desire.

Something dark brews on the horizon.
A huntsman lurks in every shadow.
But nothing can keep Neva’s mind from her burning need for Reve’s touch in the land of dreams, for Herrick’s stolen kisses and for Malvolo’s all-consuming hunger.

MY REVIEW
Snow is in the depths of her own personal hell . She doesn't remember her past and she was dumped at a tavern as a young girl . Now she is dancing for the wealthy in a tavern called the WICKED LYRE . She is also being abused by the owner a gross little man who would beat her and rape her on a daily basis . Until the day Herrick walked into the bar and felt that there is more to Snow then people know . When he buys a night with her , he sets into motion the journey for him and his brothers to find out Snows aka Neva's past , Also falling in love with her along the way . Will they find out her past and will they be able to wake up their brother Reve from his dream state,

\Neva aka Snow White well man she is complicated . She has been a victim since she was a child . When we first meet her , she is beaten down physically and mentally and feels like she wants to die . We see her fight for her life and starts to become a very powerful . She is very complex and you will love her .Now lets talk Herrick Malvolo and Reve . Oh my goodness you will want to fan yourself when you start to get to know these men .  Herrick is the sweet one well he is Doc from the story . He is tall. sexy and he is sweet and kind hearted . Malvolo is well he is grumpy and a war torn veteran of the  wars there is more to him and when you get to know him you will either want to slap him or climb him like a spider monkey . Reve is well he is like the damsel in distress , he and Neva can slide into each others dreams . He is kind and loveable . Oh and the guys are hiding a secret and I am not going to tell you I want you to find out on your own . But I squealed when I found out and was so excited . With every good guy there is the evil and the huntsman are the evil in this book along with Hell hounds .

I am going to warn you right now , the first part of this story is dark and kind of hard to read but you will get through it and then the adventure begins . The story is a great twist on the fairytale  and the characters are so well written .  The author will take you on a ride that will have you gasping and fanning yourself .  There is a mystery , romance and action, you really want to find out why Neva's memories were taken and will she get them back . You will not be able to put this book down , it will suck you and keep you reading . |I really can't wait to see what the author does with the series . I can't wait to dive into book 2 . So if you want a great start to a new series check ti out .
Posted by BOOKS TO CURL UP WITH at 8:15 AM