Good Saturday all , day I give up . Today I have a new book by Matthew Cox THE GIRL WHO FOUND THE SUN . 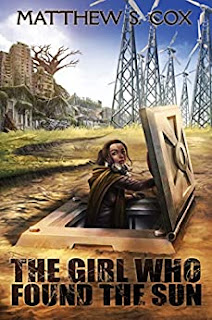 It started with the insects.

The mass die-offs had been a warning unheeded. Before society realized the danger, the Earth had inexorably begun a transformation into a place where life could not survive. A small group found shelter in the Arc, an underground refuge safe from the toxins ravaging the surface.

Her job fixing the machinery in the Arc makes her aware of how close everything is to breaking down. When the systems fail, the last survivors of the human race will suffocate in the tunnels meant to protect them from the deadly air outside—starting with the most vulnerable. Unfortunately, in an example of history repeating itself, those in charge dismiss her concerns.

When her six-year-old begins showing signs of oxygen deprivation, Raven refuses to go quietly into oblivion.

She will break every rule to keep her daughter alive.

MY REVIEW
Raven has been on the ARK  as the Earth was dying off . Her and a small group found the shelter and time is slowly starting to run out for them . They will suffocate if the machinery start to fail .  When her daughter shows signs of oxygen deprivation  Raven will do anything to get her daughter safe . Even if it is breaking every rule in the Ark .
This story what can i say about them , they are well written and complex . Raven is a character that will have you cheering for her and also crying for her a few times . She is one that will stick to the rules until there is something to fight for and her daughter is the reason for her to start fighting. She is strong willed and intelligent and will ask the tough questions . I truly like her and her willingness to do whatever it takes to keep her daughter safe . I must say there are a lot of characters in this story that are all so well written .

The author takes us on an adventure in this book and you are on the edge of your seat most of the way through the book.   I tried really hard to put this book down to do stuff but I just couldn't the characters had me hooked and the story line had me sucked in from the beginning . Like all this authors work there are so many twists and turns you will have your mind blown most of the time . I truly liked this book and would love to see another book in the series so that I can keep up with Raven and everyone . Yes i got invested in the characters and loved every second of it . So if you want a story that will have you on the edge of your seat and have you thinking of what if that ever happened . Check out the book you will not be disappointed