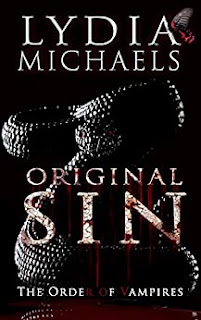 Adam Hartzler has always been an honorable immortal, but the fine line between right and wrong begins to blur when he is called to his true mate. If he does not find and claim her soon, he will lose his soul and humanity, transforming into a vile predator controlled by insatiable bloodlust, sentenced to a demonic and tortured eternity as a vampire.

Adam sets out on a quest to hunt his mate and claim her before it is too late. His salvation relies on his destined mate’s surrender, but when she refuses to cooperate, Adam must set aside his morals and do what is needed to survive. Time’s slipping away with his control, and his territorial instincts refuse to let her go.

Annalise Snow awakens on a primitive farm removed from modern civilization and in fear of her life. Her captor is determined to keep her prisoner and believes he is somehow entitled to her future. But she will not surrender easily. When Adam asks for the ultimate sacrifice, she must decide if he lives or dies.

Passion and emotion collide in an explosive meeting of destined souls, but love is never a guarantee, especially when eternity begins with betrayal.

MY REVIEW
Adam has always been a very honourable immortal until the day his world starts to shift and the lines between right and wrong begin to blur when the pull to find his true mate is clawing at him . He has to find her before he looses his humanity and his soul or he will turn into a tortured demonic vampire . Will his mate come to him willing or will they have to do a dance that will have them both wondering what and if they can be together . They need to overcome the betrayal that started this and surrender to the love that is deep down inside .

Ok you are probably waiting for me to tell you about the characters in this book .The first thing i am going to say is holy hotness who knew that you could take and Amish man and make him sex walking , that is Adam to the core. He is immortal but such a honourable man but also such an alpha man that would have any woman swooning at just one look . He does the wrong thing for the right reason and there are moments that you will hate him and then there are moments that you will want to climb him like a spider monkey and say yes Sir . Now Annalise well she is one feisty woman. sassy beyond words but there is also a sadness in her that you just want to hug and help her out. She does put up a good fight with Adam and when they are together they are combustible .  I loved these characters so much  i think that they are my new favourite book couple .

Ok first thing first this is a whole new rewrite for this author . This has such a great twist on the paranormal romance genre. there are twists and turns that will keep you on the edge of your seat and there are some moments that will have you blushing and your kindle might  melt , This book is intense and it gave me all the feels , there was moments of light and then dark.  I truly enjoyed every second of this book and i couldn't put it down . The characters are so well written and complex you will love them all and want them to be happy . So if you want a story that will give you all the feels and have you reading until the wee hours of the morning . This is the book for you . I so can't wait for the next book in the series . So check it out I promise you will not be disappointed .